I discovered a new type of filo dough. A sheet of dough so thick that 5 sheets weigh 400 grams ! This version here, at least the dough part, was an experiment, in addition to my other older pita recipes !

A traditional spanakopita is more rustic and could include a modifiable variety of ingredients but of course is composed of mostly spinach and feta and fresh herbs. But extras and/or omissions are also a possibility and I always prepare my vegetables and herbs mixtures beforehand, without the addition of the feta cheese nor egg, and once partly cooked, I just freeze them in freezer bags in convenient portions so I could make up to two pies, anytime I need to.

The trick with this dough is you have to wet it or soak the sheets for almost 3 minutes before using them, to soften them and to make them more pliable. There are of course other thicknesses and I have a pack in the freezer that has 13 sheets for a total of 400 grams or 30 grams per sheet. Of course, the other option is to make your own filo dough, but that’s another longer recipe.

Now spanakopita is always made with spinach (always the tastier, bigger, dark green leaves and not baby spinach used for light salads), green onions if in season, a lot of dill, some parsley and a little bit of mint, but there’s no reason not to add leeks, fennel bulb, white onions, some lemon zest, some garlic, and other greens, if that’s what you have on hand. You’ll adjust it little by little as you go along until it corresponds to what you like.

The cheese used is always feta but some like to add some cottage cheese or cream cheese to make it creamier and for the eggs, it can be eggless or 2 eggs or even more if you want it to resemble more to a denser quiche than a drier spanakopita.

In the end, the recipe is versatile, a little more or a little less of an ingredient doesn’t make that much of a difference. Do what you prefer because that will always be the best recipe that you will repeat.

My rule of thumb is to combine the partly-cooked vegetable and herb mixture with half as much of the rest for the filling, so if you have 1 kg of the partly-cooked vegetable and herbs mixture, you need at least half as much or 500 grams of the cheese and egg mixture, usually, made up of 75%-80% cheese or 375-400 grams and 20%-25% or 100-125 grams eggs. And the total dough is aabout half of the vegetable and herbs mixture too, in this case 400 grams of filo dough, which is soaked and then drizzled with the olive oil, so lets say about 500 grams too … Got it ?

Even the dough varies from region to region. Sometimes it’s a sesame seeds studded bread dough, but it can be a puff-pastry dough or different thicknesses of filo dough. I tried it with the thickest filo dough possible and it was very satisfying. There were less sheets to drizzle with olive oil but it needed some wetting or soaking beforehand because they’re less pliable. The result is a sturdy, very crunchy dough that holds up very well and that allows you to prepare a very thick and high spanakopita, but it is harder to pre-slice before baking so scissors or a very shard knife are needed.

The verdict ? The family members  who were visiting Paris for whom I made this (they were my blood-related guinea pigs) loved it, the young daughter especially,  so it must be good ! … :)

p.s.: I posted this recipe later than usual because I’ve been re-painting a few rooms and even though the recipe was ready to be sent off very early this morning instead of now, I simply forgot. Yeah, yeah, ha, ha, go eat some spanakopita ! 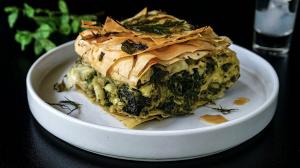 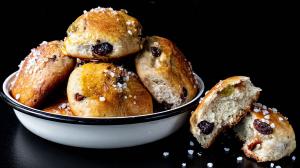 Poor little raisins, so often forgotten and considered much less interesting or fancier than other red or blue dried fruits. And yet, at home, we often had an after dinner ritual, instead of eating...