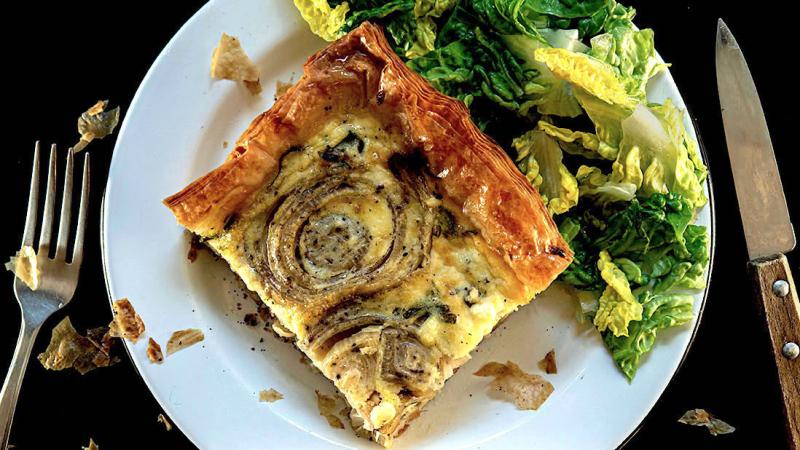 ONIONS are not just something to be added to dishes as a flavoring. They can be the star of the dish because they’re flavor bombs, especially after partly roasting.  Just as a PIE CRUST is not just a bland vessel to contain the pie fillings because it too can make the dish memorable, through its exceptional (and hopefully not soggy)... 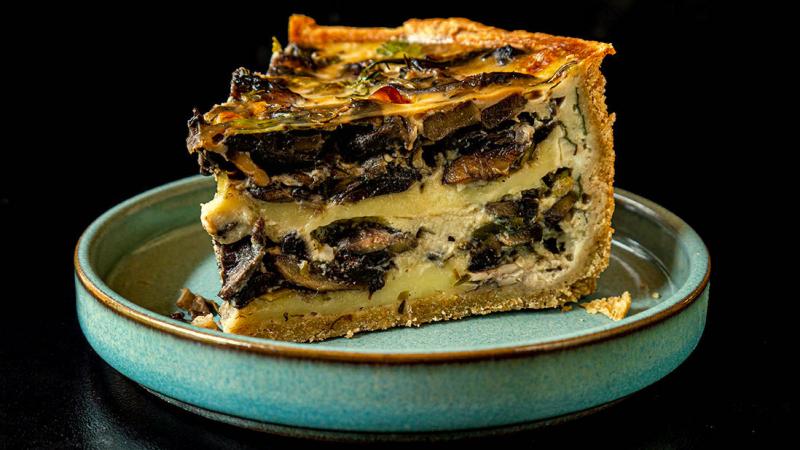 SIX LAYERS IN ALL. Two alternating layers each of sliced brie cheese, fried mushrooms with leeks and aromatic bechamel sauce (made with the vegetable leftovers), all wrapped up in an over-the-top and high whole-wheat crust ... Mushrooms and leeks are pretty inexpensive this time of year and I think I’ve included mushrooms in my... 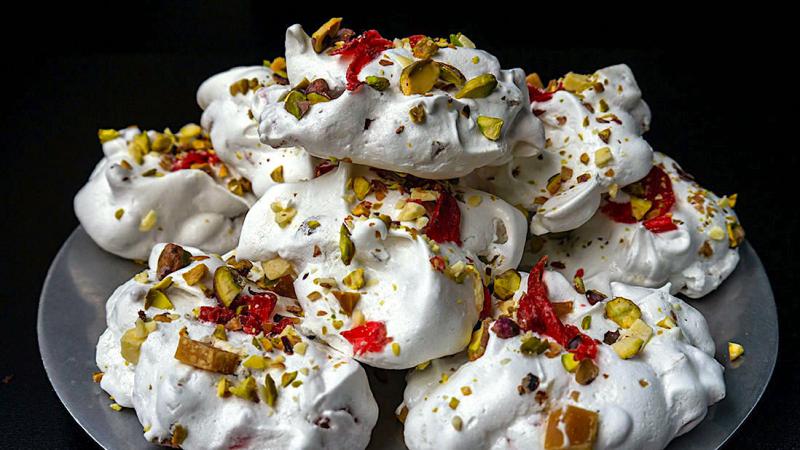 After 1 day and 2 nights of still eating all sorts of leftovers, I’m quite certain that you still have small unused, uncooked or unbaked ingredients as leftovers to use up too ! Little bits and pieces of stuff, here and there and everywhere, as well as little jars of stuff in your pantry and refrigerator too, like EGG WHITES most probably... 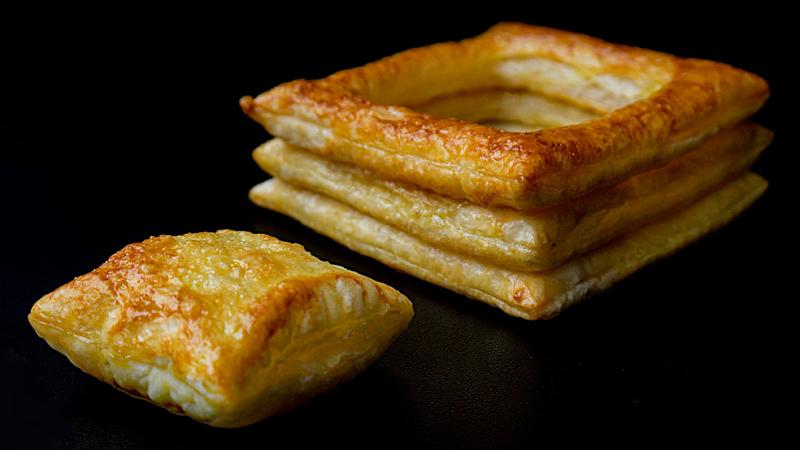 Just like PILLOWS and INFLATED MATTRESSES ! What interesting puff-pastry architectures indeed ! Originally, the “vol-au-vent” culinary term signified “windblown”, to describe the hollow, light and airy puff-pastry cases or patty cases, prepared and pre-baked, to be later filled with sweet and/or savory fillings, most often... 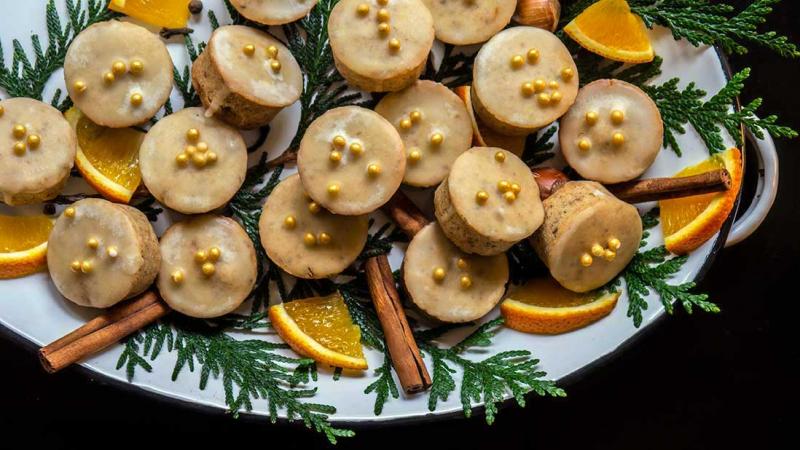 I have extremely fond memories of shared winter holiday meals, but many actually took place before or after or in between the official Christmas and New Year’s festivities. They weren’t the fanciest nor the best prepared meals, and to be honest, many were whipped up at the last minute. And yet I remember them more fondly, perhaps... 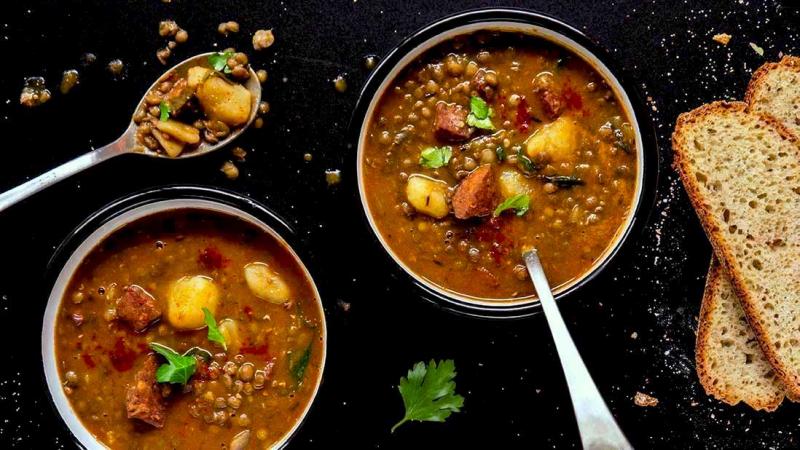 Every country, every region and perhaps also every neighborhood and every household has their own versions of lentil soups, but this one, called «LENTEJAS CON CHORIZO» is my favorite. An intense, spicy, smoky, herby and hearty version with sliced chorizo and extra paprika. It’s a full meal for these colder months,... 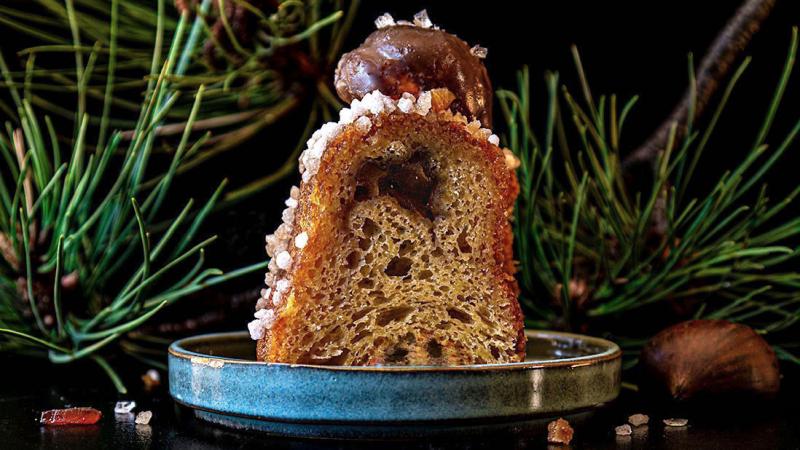 This is one of those modified pastry or brioche dough and yeasted cakes you only make once per year, after the New Year festivities and for Epiphany on January 6, especially in francophone countries and regions or for Mardi Gras in February, in many countries overseas. Because it’s a multi-step cake, even when initially mixing it and a... 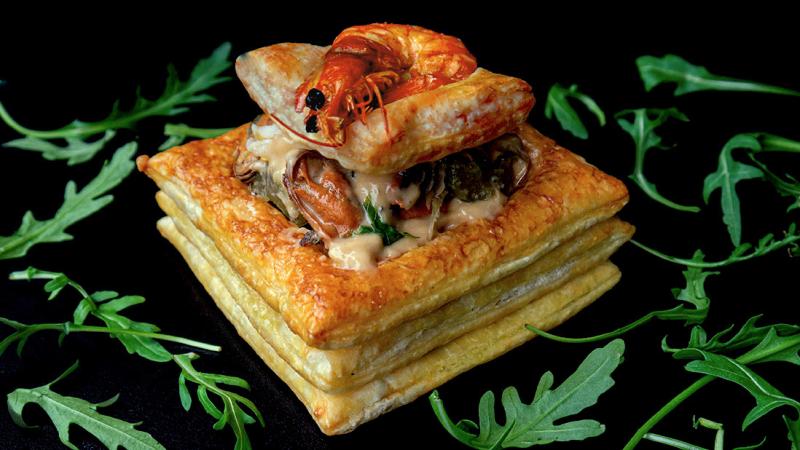 Are you feeling the 2020 Christmas and/or Holiday Season spirit yet ? I know what an unusual year it has been for all of us. I wish things had been different but they’re not. But all is not lost. You can try to bring that holiday joy back, even though the preparations for this year’s joys will be limited to smaller numbers and smaller... 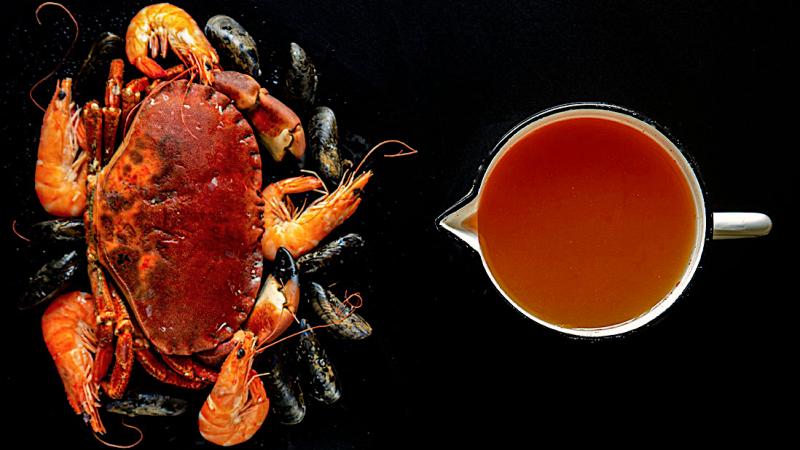 Believe it or not, your final preparations, whatever they may be and if they require any broth or stock, will only be as good as the broth or stock you use and incorporate into your dishes, whether home-made or store-bought. Many view stock or broth as just an ingredient and most often as a cube or two of dehydrated and compressed powders, to... 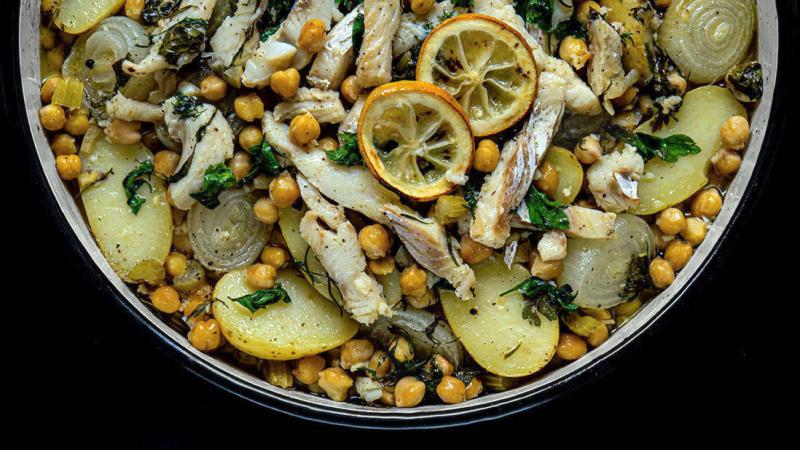 In these uncertain times, how can you extend a delicious winter dish with salt cod to 4 servings (when it was initially intended for only 2) and add flavor by hardly increasing its cost ? Use the de-salting water of the salt cod as the brine for preparing all the extras ! I’ve made this dish before (for the blog), using the same amount of...

all about experimenting, understanding, demystifying, explaining, preparing and sometimes inventing mostly «mediterranean» recipes with worldly influences and continental reinterpretations with tips & tricks and lots of dumb stories too  . . .

*the countries with coasts on the Mediterranean Sea are Albania, Algeria, Bosnia-Herzegovina, Croatia, Cyprus, Egypt, France, Greece, Israel, Italy, Lebanon, Libya, Malta, Morocco, Monaco, Montenegro, Palestine, Slovenia, Spain, Syria, Tunisia, Turkey and some British overseas territories (but I like to include Portugal too) and I think about our friends & neighbors in Europe and beyond …

I'm George or G-TSAK (which is easier to remember than Georgios Tsaklidis) and I cook stuff so that you can cook stuff too.

I was born to Greek parents who love to cook and eat and pretty much make almost everything from “scratch”... (and the picture above is me at 7 years old, wearing the suit and shirt & tie that my mom made for me).

Growing up in Montreal, with a lot of time being spent in between Greece and Canada, I pursued degrees in interior design and electrical engineering and then moved to Ottawa for a final degree in industrial design (which I felt combined the aspects of the first two).

Mid-degree, I was pushed to go to Paris for a short student exchange that turned into a full year scholarship and also won my first design award (I love this city) … The first few years, there was a lot of going back & forth from France and Canada and the U.S., but I live in Paris now. And yes, it’s really nice having 3 passports !

After several years of design work,, headhunters whisked me away to collaborate with the french institutions ... So yes, I do have a day job, just like you. I'm just curious by nature, which is why I experiment while preparing and sharing these dishes with you. Sometimes they’re quick & easy, sometimes not, but there’s usually alot of «breaks» you can take in between the steps, (just in case you need time to recover or to do other stuff) …

I spend half of my time in a suit & tie with a briefcase and the other half in pyjamas (yes, people do still wear them) experimenting in my teeny-tiny kitchen, most often covered in flour and other splatters & stains … Yes, I can be “messy”.

Being a do-it-yourselfer by nature and definitely needing a new creative outlet, the icookstuff blog/website was launched just over 3 years ago in March 2016, upon the suggestions of loved ones, who also share a passion for cooking and food, and of course my dear friend’s encouragement and support, who also happened to be a web-developer & designer and who helped me create this website from scratch. Yeah, it’s a lot of work !

But did the world need another “food blogger” ? NO ! Did people need to get back in touch with cooking and everything homemade ? YES ! You should “know what you eat” or at least have a clearer idea of what you’re eating and/or drinking and putting inside that body, not to mention the possible "savings".

The blog isn’t only about cooking stuff. It’s about experimenting with food & techniques, trying to eat in a more "wholesome" & “conscious” manner and using everything you can, and wasting even less. You’d be surprised that what we often discard is still quite "usable" as an ingredient.

Am I obsessed with my blog ? YES and NO. I don’t cook FOR the blog. The blog is MY COOKBOOK and represents a personal need to better understand and demystify food and to especially put some order in my recipe “scribblings”. I try to document all my experiments & trials with photographs (nope, no studio nor special lighting … just a regular camera, a tripod, daylight and wooden boards).

Often, forgotten trial recipe scribblings and weighing absolutely everything before & after (including the remains) and taking photos to accompany all of this, can help to literally “jog” your memory when you reattempt or retest a recipe (even months later) or even lead to something totally unexpected & new, so give it a try .

So, as you've understood by now, "I'm no chef" and I don't work in a restaurant and I respectfully tip my hat to those who are and who do, “I just COOK STUFF so that you can cook stuff too” …

Anyways, I hope that the blog will please you and that you'll experience as much pleasure scrolling through it, as I do putting it all together. To be honest, you know what really takes alot of time ? Translating the blog into both French & English, but I'm going to try to keeep that up ... "the more the merrier", right ?!

I like challenges and trying out new stuff so please continue sending me your comments, ideas & suggestions ... The idea behind this blog isn't about me showing you what I can do, but rather about exchanging ideas and good tips and encouraging us, both you & me, to try out some old & new stuff & tricks.

p.s.: I really LOVE exclamation points and question marks and dot-dot-dots . . . did you notice ?!