It’s already AUGUST 1st so how about if we prepare enough fillings for 25 VEGETARIAN TACOS to eat for the next 3 days or throw a small intimate party for our family and/or close friends and eat everything tonight ?! And don’t forget the watermelon cocktails and fruit salad …

Tacos are so Mexican and yet, the original idea of flat breads that were to be filled with whatever you had (especially goat and lamb meat, but this version is vegetarian) was brought over by Mediterranean, especially Lebanese and other Near-Eastern sailors and merchants centuries ago.

Peppers, zucchinis, squash, tomatoes and other vegetables are considered to be so Mediterranean but they were brought over by sailors and merchants coming back from Central America, the way pasta and rice, eggplants, onions and garlic and most citrus fruits were initially brought over from Central Asia.

What are truly Mediterranean foods are WHEAT and GRAPES and OLIVES and we share that with the rest of the world too.

It’s these exchanges between continents that make up the world that we live in and the cuisines we often consider to be exclusively ours or theirs.

We share more than we think with even more faraway people, cultures and regions of the world. It’s a small world after all (as you may have noticed) so we should all be sticking together and maybe eating tacos, souvlakis, shawarmas, wraps and all that stuff more often too … :) 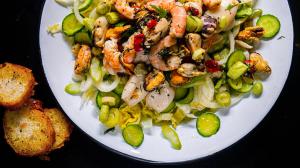 Nothings says joyful, relaxing and lazy “summer” more than a marinated seafood salad (even though seafood is more plentiful in the colder months) so a summery version must include...