It’s a wonderfully delicious dough and it’s more interesting if you make 6 DIFFERENT MINI-PIZZAS. The toppings can be a variety of thicker spreads (instead of thinner sauces), like red tomato, green pepper, white mushroom, purple eggplant and black olive preserves called caviars, “confits”, tapenades or just spreads, different pestos and why not preserved meat spreads like “terrines”, “rillettes” or fresh chorizo sausage paste or bacon jam. All you need to do is make the dough, let it rise, reshape, spread the “spreads” and top with the shredded mozzarella, let it rise again and bake !

It’s the season to prepare most of your preserves, whether sweet like jams and jellies or neutral like jarred tomatoes or savory like partly baked and oil-packed or pickled vegetables. Due to my limited storage space, I’ve become quite the expert at reducing things in size and packing them in small containers. Medium-sized jars of partly oven-dried tomatoes, green peppers and mushrooms, packed in oil, as well as more compact and puréed versions or spreads of the same, in smaller jars (see all these recipes on the blog here).

These spreads, all prepared once a year in mid-summer, will be the toppings for 3 of the deep-dish and thick-crust mini pizzas and the other 3 will be more easily store-bought at the last minute spreads, like black olive tapenade, chorizo paste and basil pesto.

As for the dough, it’s a much softer, richer dough on the inside but crispy and oilier on the outside and it’ll ooze into the shape of the well-oiled baking pans, with just a little nudge and poke. I also prefer a 1st rise that is longer and then a short 2nd rise with the toppings already added, that way you don’t disturb the dough before baking it !

The result of this recipe can be compared to a tender and almost pan-fried focaccia bread, topped with just enough sauce and cheese. Basically they’re delicately flavored mini-pizzas for snacking with two-thirds bread and one-third toppings.

And of course, don’t forget the decorative garnishes on top to distinguish them from one another . . . :)

p.s.: i’m also trying some out some extra trials with cheesy béchamel sauce, fried potato, eggplant and zucchini slices and mozzarella with parmesan !!! 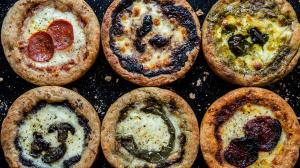 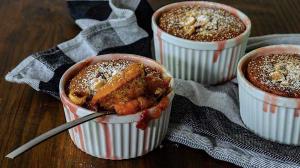 … with a mix of stone fruits like bright orange APRICOTS, FLAT VINE PEACHES, WHITE NECTARINES and YELLOW PEACHES (but you could add some PLUMS too), all bathing and lolling around in...