A KOKKINISTO is most often prepared with large cubes of meat, often veal and beef or sometimes pork but also chicken, that are stewed and gently simmered over several hours. It’s the sauce base that is used for a GIOUVETSI stew but also for MOUSSAKA and PASTITSIO, when prepared with ground meats instead.

I have various versions of KOKKINISTO sauces which I often experiment with but it’s quite rapid to prepare if you use MEATBALLS (and if they’re ready in advance). Stewing cuts of meats usually takes 2 hours before adding the pasta or rice and/or sliced potatoes, but using meatballs cuts the simmering time down to 30 minutes.

As for the ORZO or RISONI or KRITHARAKI, it’s like eating large grains of rice but it’s actually wheat or barley pasta and is available in different sizes, 10, 12 and 14, the largest being my favorite.

A good ratio between the different elements is to prepare twice the amount of sauce to the raw meat available and later after the meat has cooked and reduced by 20%, then use equal parts of cooked meats and cooked pasta or half as much uncooked dry pasta as the amount of the cooked meats (since the pasta will double in weight after it cooks and soaks up the sauce).

The dish is usually prepared on the stove top and then finished in the oven with the pasta, rice or potatoes, in a large baking dish covered with aluminum, I find doing everything in the same large and heavy casserole with a lid, on the stove top, from start to finish, is just as good and easier to check for its readiness and to stir it and adjust it to your taste. 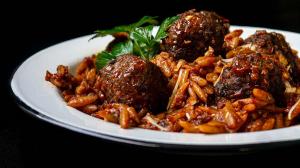 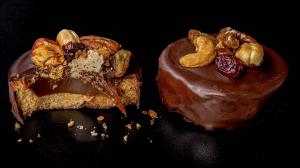