… with only 2 main ingredients : triple-strained and thickened Greek-style yogurt (as thick as Lebanese labneh but not salty) combined with sweetened condensed milk and a few little extra hints of the flavorings that you choose to use, whether it’s fresh lemon or lime juice, vanilla extract, floral waters such as orange blossom or rose or geranium, a hint of alcohol or my personal favorite, a few mastic resin crystals (natural mastiha from Chios) that I crush into a fine powder with some sugar and mix with the orange blossom water.

The proportions for this recipe are ridiculously simple. Since 1 can of sweetened condensed milk weighs 397 grams, all you need is to add double that weight in triple-strained yogurt and add some flavorings.

The first time I officially ate labneh or yogurt cheese was when my dear neighbor brought some little labneh balls packed in olive oil and herbs, from Lebanon. The second time I had unsalted labneh was accidental. I had bought a 1 kg plastic tub of Turkish double-strained yogurt which I accidentally dropped and cracked on the bottom without realizing it and placed it in the fridge. A few days later, there was a puddle of water around the tub and it had thickened even more. I mixed it up with a lttle bit of salt and lemon juice and strained it some more and used it as a dip with some olive oil and zaatar.

Interestingly enough and unknowingly, this is also how I’ve always prepared tzatziki. I usually only had single-strained Greek-style yogurt (with 8% fat content) on hand so I strained it really well overnight or up to one day until only half was left, before turning it into tzatziki. Using double-strained yogurt (with 10% fat) is easier and faster and adding salt and some lemon juice speeds it up even more.

Plain unflavored yogurt is available around the globe, in a multitude of varieties and thicknesses. Regular yogurt is looser and more liquid and usually has a fat content of 2,5%–5%. Strained yogurt (often referred to as Greek-style yogurt but actually exists throughout the Balkan, Eastern Mediterranean, Middle Eastern and Central Asian regions with different names) is strained once (or single-strained) to remove at least 25% of its water or whey and has a fat content of 8-9% and is obviously thicker. Double-strained yogurt is even thicker and more compact, with 50% of its liquid whey removed and has a fat content of 10%. Triple-strained yogurt or yogurt cheese or labneh as we often call it, is the thickest version possible, mixed with the addition of salt, anywhere from 1 tsp to 1 tbsp per kg, depending on its intended use and then strained until it resembles soft cream cheese.

Ideally, you should use double-strained yogurt at 10% fat, add some salt (but not too much) and strain it further for 24-48 hours until it loses at least another 20%-25% of its liquid which will raise its fat content to 12,5%-13,5% and be better suited for making a dense ice cream with little or no ice crystal formation.

Using sweetened condensed milk in this recipe, which is a very stable product that will not crystallize nor separate, will allow you to add sweetness and smoothness to the ice cream mixture and is also the best option if you don’t have an ice cream maker to churn it.

Churning the mixture will add air and lighten it without creating ice crystals or a crunchy ice cream, but is not obligatory. You can also use an electric mixer and whip it several times as it is freezing or decide to leave it as is for a very dense version that will require some extra thawing time before enjoying.

The flavorings are all optional of course. You could opt for the plainest version with nothing or just add some lemon or lime juice or a hint of vanilla. Most extracts are made with alcohol and adding some alcohol and extracts will keep your ice cream softer if you decide not to churn it at all but don’t add too much, 1-2 tbsp should do the trick without affecting the flavor too much and if you prefer, you can use a neutral alcohol like vodka, but since I churned mine in my ice cream maker, I used no alcohol at all.

About mastic resin crystals, usually from the Greek island of Chios, they add a wonderful fresh flavor and I use them often in many preparations instead of vanilla. In this recipe, since no heat is used in any of the steps, it is best to crush the crystals with some sugar, otherwise they can melt and become sticky and then let them almost dissolve in the orange blossom water but 1 tbsp of neutral vodka could be used too.

Anyways, enjoy the hot summer and see you soon … :)

P.S.: today is my dad's birthday who will be 84, healthy, strong, active and full of life and with the appetite of an ogre so HAPPY BIRTHDAY DAD, i wish i could have sent you all of this ice cream just for you ! xo 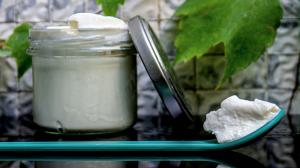