I hadn’t realized that I had never shown you all how to make the simplest of all Greek-style cheese pies or called “TIROPITA” when large and then sliced into squares or smaller turnovers called “TIROPITAKIA” when shaped or folded into small triangles to become 2-bites appetizers !

Of course I’ve shown you larger pies or “pitas” as we call them and medium sized hand pies with many variations too, the most popular being the well-known spinach, cheese & egg “spanakopita” but I’d forgotten to talk about a simple egg & cheese pie ? And yet, we Greeks make them quite often, freeze them and whip them out when last-minute guests pop in.

TIROPITA or cheese pie is a lot like a creamy quiche in a crisp pastry wrapper and is usually made with beaten eggs, feta cheese and a softer creamier cheese, usually fresh mizithra in Greece, but ricotta is quite similar and easier to find. Many today will also add grated semi-hard cheeses like gruyere and a hint of parmesan and even a delicious creamy béchamel sauce, but this can only work when making a larger flatter pie in a large baking dish, because the filling will be too liquid. Some fresh herbs are often added in the filling for a lighter and brighter flavor, usually flat-leaf parsley and mint and oregano but some add dill too. The sesame seeds are just used as garnish to dress it up, but are tasty too, in a subtle textural way.

TIROPITAKIA (just like SPANAKOPITAKIA) are just the cuter little cousins of the TIROPITA. They are triangular and the easiest to make and freeze for later and the simplest to make in smaller or larger batches and I usually just make them with the remaining sheets of a roll that initially had 20-25 sheets each.

I’ve simplified the ratios between ingredients, using 1/3 eggs, 1/3 feta cheese and 1/3 ricotta, with a few extras. This way it’s less salty and less heavy, a bit eggier and quite satisfying and a little bit of basil makes it even more summery and works well with the mint and parsley.

This recipe is for 12 small 2 bites each version but it’s just as practical to make only 9 larger ones by slicing the doubled-up filo sheets into 3 (and not 4) and even though they’re considered as appetizers when they’re tiny, when slightly larger and served with a green salad with some fresh green onions, it can also be a nice vegetarian summer meal. 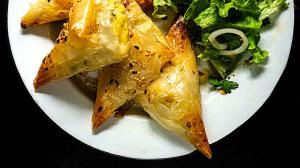 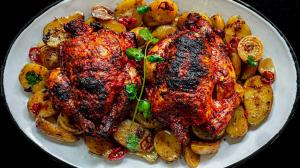 Both an African (Angola & Mozambique) & European (Portugal) recipe, this succulent preparation with a whimsical sing-song name, refers to the sauce prepared with small bird’s eye or...