*My building caretaker or ‘concierge’ (as we say here in France) and also my dear gardening buddy (Mr. M.O.) came back from a short trip to Algeria 1 month ago with a suitcase stuffed with fruits & vegetables (it’s not the first time nor the last time, he always does that) . . . I think you’ve seen many of the things he’s brought back over the last year and a half in a lot of my summer & fall recipes.

This time, in addition to the dates, I received almost 2 kg of fresh hot peppers, probably ‘jalapenos’ but I’m no expert, but they lasted over 1 month in my refrigerator.

I live in a household and a group of friends where I’m the only one who can deal with the fiery heat of chili peppers and other very spicy ingredients so I can’t really add these hot devils to my regular dishes unless I’m planning to eat alone in a corner like a psycho.

I froze some and started drying a few others and I added some to a bottle of olive oil to make something like a flavored chili and garlicky oil that I can add to my own plate without torturing any others.

But then I thought of a way to use them up (and share them with others) in such a way so as to slightly tame their fiery hotness (let’s be honest, by only a little bit) and serve them as appetizers (one step at a time, little bites, little bites).

This recipe satisfies the craving for chili-hotness for those who (like me) love hot peppers. I remember that even as a kid, I ate so many different varieties of hot peppers until my eyelids started tingling (not because I touched any part of my face after handling the hot peppers, because you never want to do that) but because I ingested so many that all the thinner-skinned parts of my body reacted to the overload of hot peppers in my bloodstream. The mellow cheeses and fresh herbs in this recipe can at least tempt the others to taste ½ of 1 or even 1 or 2 without dying nor choking …

All you’ll need is a mix of grated cheeses, a soft spreadable cheese like cream cheese or a mild and soft goat cheese or any other spreadable soft white cheese, some garlic & onions & lots of herbs and don’t forget the breadcrumbs to top the stuffing which is really important because the breadcrumbs pull and stiffen everything together and stop the cheese stuffing from just oozing off the sides (which you can see in the one photo with all the droopy-looking different-sized peppers that didn’t have enough breadcrumbs topping to solidify them) …

I’ve made these several times in the past month, at times using only the smaller very hot jalapenos and occasionally using a mix of smaller milder hot peppers and small sweet banana peppers several times too (for those who really, really can’t handle the heat).

For your information, the particular molecule in hot peppers called “capsaicin” is really good for you and will help fend off and fight illnesses so even if you find it too difficult to eat hot peppers, try to have one or two once in a while … (hey, I’m just sayin’ !).

By the way, it’s also time to start freezing your herbs and fresh chopped vegetables now, before it’s too late and winter comes knocking on our doors (unless you live in the southern hemisphere). 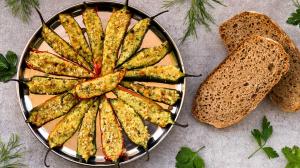 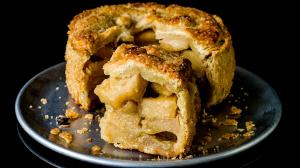 APPLE PIE : American, European, French, British, German, Austrian, Scandinavian ?  ALL of the ABOVE my friends, and many more . . . (and I know this too well because I've prepared at least a...