Believe it or not, your final preparations, whatever they may be and if they require any broth or stock, will only be as good as the broth or stock you use and incorporate into your dishes, whether home-made or store-bought.

Many view stock or broth as just an ingredient and most often as a cube or two of dehydrated and compressed powders, to be diluted in water.

It’s much more than that.

A home-made broth is not only more flavorful and healthier but also the best way to use up all sorts of leftovers, whether expensive or not … and I mean absolutely all leftovers.

Bones, skins and scraps from cuts of meat, shells and carcasses from seafood and shellfish, heads, fins and tails from whole fish, whether raw or already cooked and discarded and probably headed to the trash after you’re done. Vegetable peelings, cores, extra leaves, stalks, root ends and skins, along with the stalks of aromatic herbs. And let’s not forget those dried out rinds of cheeses too. Just place your scraps in freezer bags and freeze them until you decide to make a broth or stock !

These are often the base of most stocks and broths. I usually weigh the solid ingredients and multiply by 3 the amount of water to be used and add coarse sea salt and peppercorns and other spices, some apple cider vinegar, which will break down the collagen in bones and I add some extra onion, carrot and celery and of course some bay leaves and occasionally, anything that might deepen the flavor, like soy sauce, an anchovy or some fish sauce, dried mushrooms or my personal favorite which is “marmite”, a fermented yeast extract spread from the United Kingdom that complexifies everything.

Everything is assembled together, comes to a boil, is covered with a lid and is simmered at very low heat for at least 2-4 hours, whether on the stove-top or in the oven in a cast-iron dish with a cover. Then you strain it well and transfer it to freezer bags in 1 or 2 cup portions or reheat it if necessary and store it, while still hot in hot sterilized jars, to keep it handy in a cool place or refrigerator.

I make this seafood stock only once or twice per year and it’s enough for the whole year, frozen in blocks and ready to be used for special occasions like this one, making “seafood vol-au-vent puff-pastry starters” (see recipe here) for the holiday season.

Use up your scraps to save the planet, to save your hard-earned money and to make something delicious … :) 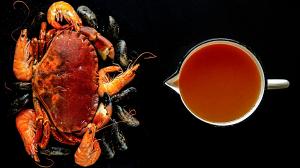 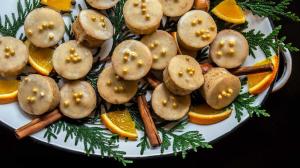 I have extremely fond memories of shared winter holiday meals, but many actually took place before or after or in between the official Christmas and New Year’s festivities. They weren’t...