If it has at least some chickpeas and tahini sesame paste, or equal to half of the total, then it’s still a hummus, traditional or otherwise, And if not, just call it a DIP then !

QUESTION : How can you play with and balance out the sweetness and earthiness of the roasted beets with the other hummus ingredients and which spices and extras do you add to make it work as a dip or spread with chips or crackers or breads ?

CONTEXT : I had several roasted and sliced beets in the refrigerator that I had prepared recently and that I was just going finish off eating as a side dish with some olive oil, lemon juice, salt, pepper and thyme, but friends were coming over for nibbles & drinks so it was time to very quickly whip up some dips since we weren’t having a sit-down fancy dinner (and the beets were already oven-roasted yesterday for about 90 minutes, which helps when you’re in a rush).

ANSWER : I just added stuff that I had in the refrigerator and/or pantry. I thought about ading FETA cheese but I needed that for something else so I just used the rest of some soft spreadable mild goat cheese (but I’m sure cream cheese would work too). The rest of the ingredients are pretty similar with other types of hummus. I find it needs the bite of extra ground pepper, cumin and sumac (such an interesting spice also found in za’atar) to balance the sweetness, along with some fresh chives and parsley that I added in the end for some green bitterness. 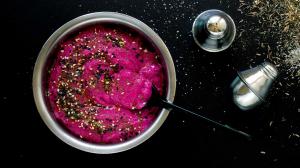 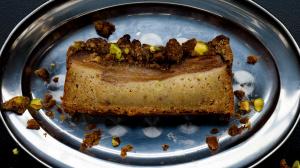 “WHAT’S MISSING ?” . . . like that feeling you get when you eat/taste something and even when it’s good, you know deep-deep down inside that it needs something EXTRA to make...