The ever-changing dates of Chinese New Year are like the never-changing dates of Christmas on December 25th, New Year’s Day on January 1st, Valentine’s Day on February 14th and Saint-Patrick’s Day on March 17th . . . it doesn’t matter what day it will be on this year nor what your ethnic origins or cultural or religious backgrounds are or even where you live. You know about it and when it happens, you want to be part of that “celebration”. You go wherever the global party is, right ?!

Here’s a non-chinese version of chinese barbecued and glazed ribs. It doesn’t use typically wonderful asian ingredients (so even my Greek mama could make this at home) like soy sauce, miso paste, hoisin barbecue sauce, fish sauce, ginger, sesame oil, etcetera.. The approach here is sincere and curious despite my ignorance and undertaken by a Canadian-Mediterranean guy who wants to be part of this annual party too.

No herbs nor citrus and no fresh vegetables either. I didn’t want too much competition with the pomegranates. Just common dried spices (to be ground if necessary) some simple condiments and that wonderful POMEGRANATE fruit in its different forms whether as seeds, juice, vinegar and molasses (all home-made but you could just as easily buy the juice and the molasses and substitute the vinegar with a sweet sherry vinegar or a fruity sweet berry vinegar).

The process was a challenge, but I finally decided on marinating, then searing, then simmering in the sauce and finally a short trip in the oven to bake them and keep them warm before serving. The other challenge was to make it easy because all Asian cooking and its complexity tends to impress me. Who likes being disappointed ? I don’t even know if these things are actually ‘glazed’ or ‘lacquered’ ?

Anyways, the mix of warming spices and the sweet, tangy and slightly bitter and acidic flavors hit the spot and then there’s that bright and festive RED color. Oh I know, you want to use red food dye but it isn’t necessary, unless you have some organic beet powder to toss in). Hey, it’s a HOLIDAY, right ? Go crazy.

Another tricky aspect here is to describe this cut of pork meat. They’re not spare ribs nor baby back ribs with the bones running all the way or partly through. It’s not a square nor a rectangle of pork belly nor a slab of bacon. They’re called pork belly ribs but I think they’re closer to steaks (about 18 cm X 7 cm x 1,5 cm each) but the cuts are actually from that part of the belly right in between and touching the ribs. Anyways, I’ll call them “strips”. They’re relatively inexpensive and often used for making sausages and terrines, it’s got a few little bones in it and it’s deliciously fatty … no problem, it’s a holiday (even though not mine) but that’s the excuse I’m going with.

note : if not using a bottle of pomegranate juice and/or prepared pomegranate molasses, prepare it yourself by crushing the seeds of fresh pomegranates to extract the juice. 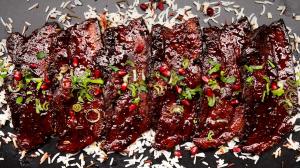 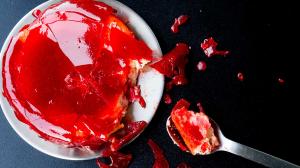 Sometimes, LOVE requires some work to get past that "shell". What are some of the words attributed to LOVE ? LOVE can be sweet, gentle and tender. LOVE can be...