ALL THOSE PUMPKIN LEFTOVERS & “WASTE NOT WANT NOT” . . . or a story about what's inside all of those pumpkins.

All those stringy and pulpy filaments & seeds just like “GUTS”, usually just tossed out after that first difficult cut separating the two halves of a pumpkin, then the scooping and the quartering. The pumpkins are sometimes smaller & cuter, but most often huge “beasts” (in my case, weighing over 6 kg and a gift from a work colleague’s country garden, thanks Bénédicte dear ! xo).

You’ve either carved it up for Halloween and placed a candle in the middle or you’re peeling and slicing up the flesh to be either roasted and served as is and/or boiled for a sweet or savory pie, tart or soup, to be most often reduced to a purée for an autumnal or Thanksgiving dinner.

Either way, after carving, slicing, chopping the “beast”, you may have set aside the stringy filaments and seeds that you were going to deal with later but most probably decided to toss out everything in the end because you couldn’t be bothered with all that … what a WRONG MOVE !

The process is simple. You’ll use the flesh for anything you need to make/bake/roast/boil/purée and you’ll use up the stringy & pulpy filaments (after separating it all from the PUMPKIN SEEDS that you’ll dry out and roast in the oven later with some salt & spices) to make 2 things : tasty PUMPKIN JAM (that tastes like fresh pumpkin and not just sugar, cinnamon, nutmeg, ginger, allspice and cloves) & a creamier PUMPKIN BUTTER (yeah, that you make with part of that still hot prepared pumpkin jam) with at least 33% real butter added and that becomes slightly caramelized.

So, just a few ideas & tips for all those holiday pumpkin preparations from the late fall to the early winter months, from your friendly neighborhood and ecologically-minded greek-franco-canadian food blogger living in Paris and blogging mostly about mediterranean food . . . :)

p.s.: with this pumpkin, I was also able to make 6 liters of soup and a 2 kg sweet rustic pie !

note : I do not remove the seeds from the thin shells because they are not large pepitas like the ones you purchase, they’re more of a crunchy snack with extra fiber … 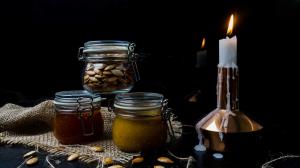 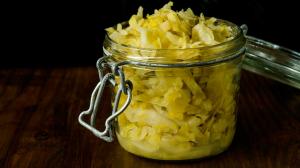 All RECIPES don’t have to be “FANCY”. . . BASICS such as CONDIMENTS are a “rite of passage”. Here’s the continuation of the CONDIMENTS series : 1...