. . . INSTEAD OF BUTTER ! Why ? Because I wanted to eat DUCK CONFIT LEGS and THIGHS (that are preserved in a lot of duck fat) that I had recently bought, so instead of preparing fries or oven-roasted potatoes with onions and garlic cooked in that same duck fat, why not seize the opportunity to make these tender melt-in-your-mouth smaller individual & neat & tidy potato stacks with all that extra duck fat ?!

POTATOES ANNA (or officially POMMES ANNA) ; a name I love because my aunt ANNA that I cherish and who is also my mother’s younger sister, had come to Montreal from Greece, as a teenager, to help raise me and take care of me in our little apartment on Saint-Urbain street and Rachel street when I was a baby, because my parents had to go to work. That’s FAMILY !

Anyways, the recipe is a simple and traditional one with only a few modifications to the original.

Firstly, instead of frying up a larger 18 cm in diameter version in a pan and then flipping it over to cook all sides, and slicing it to serve, I oven-bake them in straight-sided cupcake molds and make individual versions.

Secondly, instead of butter, I use duck fat that I flavor, by melting and simmering it with garlic, onions, bay leaves, thyme, salt and pepper and some extra spices. Two options are available even here, you can slice or quarter the onion and garlic and then remove them from the melted and heated duck fat for a lightly favored version or purée them for stronger flavors and strain the duck fat completely, partly or not at all to get those extra bits of flavor when you take a bite.

They’re easy to prepare in advance and you can let the fat harden around the potato stacks in the molds and in the refrigerator to bake them in the evening or even the next day. In addition I used all the excess duck fat from the preserved ‘duck confit’  and flavored it all to coat the duck legs with the mixture too, I let the fat harden up around the legs in the refrigerator and baked them the next day. Of course, you can also buy duck fat in a jar (if you’re not preparing duck confit legs and have extra duck fat) and serve them with roasted chicken, turkey, duck, etc..

It’s an easy preparation for holiday meals and as we know, a lot of those are coming up very soon in the next 6-7 weeks . . . :)

8 potato stacks of 85 grams each

note : I made 50% more the amount of the flavored duck fat and used it to coat/marinate the duck legs for several hours until the fat hardened again and then oven-baked them too at 200°C for 20 minutes as I reheated the potato stacks towards the end … 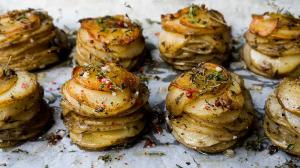 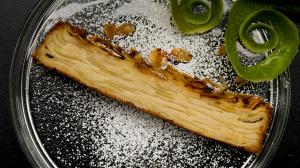 WHY 5 ?! Because this experimental recipe is also a precise mathematical equation. It requires 5 times the amount (or weight) of thinly sliced round apple slices (cored and peeled) as compared...