Once upon a time (a few days ago), a few fresh PLUMS (the ones that turn into dried prunes later on) decided to have some fun and live it up before they lost their ‘freshness’ and dried up. They wanted to go on “dates” before their time would come. It just so happened that a few fresh DATES (the ones that turn into sweet & sticky dried dates later on) felt the same way, because dates like to go on ‘dates’ . . .

In the plant world, love is GREEN and not RED, like it is in the animal world. PISTACHIOS are a symbol of LOVE in that world but many pistachios wanted to be more than just symbols. They wanted to be part of that LOVE adventure, so they went to see the ever-wise and quite zesty (and omniscient and omnipresent, especially in the kitchen) LEMON ORACLE who told them that they would be the CUPIDS to the oh-so-fresh DATE & PLUM love story and adventure.

Usually, the plums hung out with the plums and the dates did the same, closely huddling together. But the green-pistachio-cupids had let loose their arrows of love and now the plums and dates were falling in love with each other and wanted to spend all their time together snuggling.

Now this was a rather unusual situation for some but “the heart wants what the heart wants”. Some couples were more courageous than others and decided to get married openly, right on top of a cake, while others remained discreet and decided to be under the cake, safely hidden and only willing and ready to reveal themselves only when necessary and only at the last and/or right moment …

In the end, they were all the same and equally sweet, whether proudly and openly displaying their love from the start or whether concealing their love & sweetness until they were flipped over, daringly revealing their inner green love-filled hearts and deliciousness.

Needless to say (but say it, I must) : And they all lived happily ever after . . . (up until they disappeared in our tummies). The memories of their love and courage lives on forever !

One recipe for two similar yet different cakes with slightly different instructions for each. One is baked and served rightside-up while the other conceals its sweetness in an upside-down cake, revealing its tenderness only when flipped over … Practically the same, except for slight differences in texture and appearance. The rightside-up version prepared is easier while the upside-down version requires some more care and time.

You decide. Make one or the other or both. The rightside-up cake is similar all the way through with baked fruit and crunchy nuts on top while the upside-down cake is a slightly drier version on the inside because the lightly caramelized and particularly juicy fruit topping is sweeter and ‘wetter’ and fattier and balances everything out.

You can make smaller versions to offer to others or a large version to slice and share with your loved ones. Because the rightside-up version can be frozen, I made a few extra medium-sized cakes to freeze until needed, ready to be thawed and reheated  for last-minute visitor emergencies !

Cooking is about needing & feeding & nourishment. Experimental cooking is about curiosity & trial & error. Cooking for others is always about friendship & love & acceptance.

Have a lovely love-filled weekend . . .

(and try to take the time to call your friends and family, that you miss and who miss you too) … :)

note : you could also use and/or replace with other small stone fruit, mixing them up or not ...

note : this recipe can be used for four 10 cm wide x 4 cm high moulds or one 20 cm wide x 5 cm high mold; I used a hinged metal mold covered with baking paper on the bottom (which I think is best) but you could use any other mold too (silicone brushed with some butter or metal, glass or ceramic baking dishes if buttered and floured and/or covered with baklng paper for easier removal) …

note : the upside-down version is better served fresher because of its softer and juicier topping while the right-side up version is quite easy to freeze if well-wrapped in baking paper, then aluminum foil and then in an airtight freezer bag … 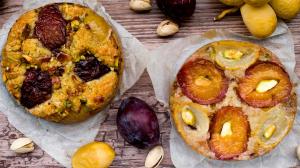 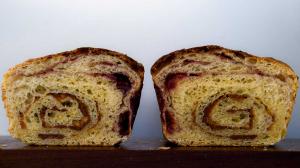 The BIG RETURN … By now, you’ve already accepted it or have been forced to accept it because you no longer have the choice. Back to school for the younger ones (kindergarten,...