. . . because it’s BETTER LIKE THIS (in an organized & anticipatory kind of way) !

So, I’m off to the airport and it’s been almost 1 year since I've posted anything that requires zucchini (as promised) but as I’m flying away, they’re back !

Franky, (a buddy who lives a few streets down and who always brings me wonderful things from close by or very very very far away, like Japan) dropped off 3 huge zucchinis from his sister’s garden weighing 2 kg … and then Freddy, who also lives a few doors away (yeah, only friends whose names begin with the letter “F” live in my neigborhood) dropped off an additional batch of zucchini from his dad’s garden weighing 1,5 kg (and some beautiful beets too) … yup !

I made 2 dishes or preparations on the same day (or actually one day and a half). The first was a stew with meat and the second was these tasty typically greek appetizers (but slightly different).

What did I do differently ?

2 OPTIONS are possible : smaller versions like meatballs with the crumbled feta everywhere (which is the normal version) and also larger patties with part of the crumbled feta throughout but a larger portion right in the middle as cubes for a creamy, melted feta cheese heart. Both can be made ahead of time, shaped and frozen for baking/frying later or simply chilled before shaping/baking and then dredging and frying (which is also why I like to use silicone moulds which ae almost like ice trays in this case, for perfect identical little shapes).

Why do I like doing it this way ? Because this batter is sticky and soft and because to firm it up more with extra flour and breadcrumbs will make it drier. Pre-baking ensures a nice compact shape and also a less oily result in the end, so they’re crispy on the outside after frying, soft and gooey in the middle and also compact because of the oven-baking and this allows me to prepare them in advance and even freeze them for a later date (before any baking and frying of course) … it’s all about OR-GA-NI-ZA-TION !

Anyways, I’ll be in a plane on my way to Montreal in Canada when you’ll probably find the time read this (which is why there’s a little “birdie” in the main photo).

note : before making the patties with the firmed-up dough, several possibilities exist, mixing everything together and rolling smaller bite-sized versions by using your palms (about 3,5 cm x 2 cm each) and frying them directly or the second option for making my versions which are larger (6 cm x 2 cm) but you only use 1/2 of the crumbled feta in the batter and you create a feta filling right in the middle of each patty with the remaining 1/2 of the feta, cut into smaller blocks, you bake them first and then fry them … you decide !

note : sometimes some zucchinis are hard & dry, if you feel the batter is too dry, add an extra egg and/or some olive oil in the batter …

note : if you make the smaller ball versions in the smaller molds the batter will be almost all the way to the top, or you can roll them with your hands, either way each will measure about 3,5 cm x 2 cm and weigh about 25 grams for 36 balls/patties … 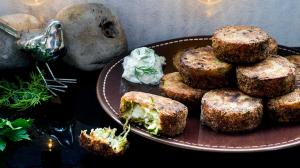 apricot jam with its own apricot almonds 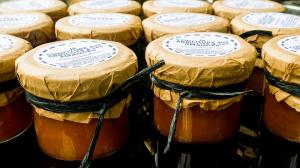 ALMONDS from APRICOTS ? . . . Yes ! (but I’ll explain later). This summer, I’ve been giving a few cooking workshops during the ecologically-conscious Festival #ENSEMBLE! in the...