HOME CURED MEATS in 7/8 DAYS : dry-curing & wet-curing (or brining) & “biltonging” too. Salt, sugar, water, vinegar, herbs, spices and other stuff (depending on the chosen method(s) !!!

At first, the idea is quite SCARY & DAUNTING … but not because it’s difficult but only because you start imagining incredibly terrible things like ROTTING and SPOILAGE and FOOD POISONING !

“Let’s get over it together.”

There are many different methods out there : the soaking or wet-curing or brining method; the dry-curing & hanging method; the South-African “biltong” method using a soaking and then drying method (usually used for thinner-cut jerky style meats, but more tender).

And then there are the ingredients ; coarse sea salt (to safely preserve the meat and draw the water out), sugar (to diminish the “bite” of the salt), vinegar (to disinfect and break down the proteins) and baking soda (for tenderizing) and the herbs & spices (for final flavorings) and then there’s this thing called ‘curing salt’ or ‘prague powder’ or ‘instacure’ for food safety reasons.

There are two types of this curing salt and they’re usually pink-colored so you don’t mistake them for regular salt. Our ancestors used saltpeter but nobody does that anymore today. Prague Powder or Instacure or Curing Salt Number 1 is 94% regular table salt and 6% sodium nitrite, used for short-duration curing periods and cured meats that will be consumed in the coming days or weeks and then there’s number 2 with 90% salt and 6% sodium nitrite and 4% sodium nitrate for longer curing periods up to many months. The reason to use it is to prevent “botulism” and hinder the development of certain more dangerous bacteria. To be honest, I feel reassured using a small amount every time even though they say nitrites and nitrates aren’t good for you. Most vegetables have low concentrations of nitrates that turn into nitrites inside your body, which is why I used celery seed here too, which is quite rich in nitrate/nitrite (and I’ve been thinking of trying to replace the curing salt with a celery seed or powder or juice mix, but that will be for later or next time).

Many people who do home-curing usually only use salt, some add sugar, some add herbs and spices too. The South-African “biltong” method uses vinegar and baking soda and then simply hangs up the thinner slivers of meat to dry. Dry-curing in the fridge lasts at least 2-3 weeks or longer, wet-curing is shorter. Temperature and humidity also play an important role and using the refrigerator at 5°C will be slower and longer than a cellar at 10-15°C.

What I’ve done here with these 2 very different types of meats such as the DUCK BREAST and the PORK FILET MIGNON is to combine different methods to speed up the curing process by guaranteeing that the meat has been properly penetrated by the ingredients used, so that the CURING will be FASTER but especially SAFE.

Here’s a short summary of what I did : I poked holes in the meat, then soaked the meat in a brine of vinegar, salt, sugar, curing salt and baking soda for 60-90 minutes, then I packed the pork and duck in the dry-cure made of salt, sugar, curing salt and baking soda for 32 hours on my balcony which was between 5-10°C (24 hours would have been enough for the less fatty pork) and I turned the meats over every 10-12 hours, then I rinsed everything off, brushed it with a mixture of smoked paprika, liquid smoke and vinegar and then coated each in their spices and or herbs, I wrapped them up tightly in cheesecloth and tied them up and hung them up in my cellar which was at 10-14°C and 60-65% humidity for 7 days (6 days would have been better for the pork, 8 days for the duck), I weighed everything everyday and noticed that the weight was slowly decreasing (20% total for the duck because it had a thick layer of fat and 28% for the pork filet mignon, but 25% for both is best), then I took everything down and unwrapped the cured meats, sliced some very thinly and wrapped up the rest and stored it in the refrigerator and we had some slices everyday.

Now if everything was cured in the refrigerator at 5°C it would have taken at least 3 weeks of hanging time (or laying down flat on a rack). I could have hung them up on the cold and windy balcony but the humidity level was too high. The pre-soaking in a vinegar brine reassured me as did the small addition of curing salt in the brine and the dry-cure (I was tempted to double the amount of curing salt but I didn’t). Both the duck and pork are salty which means they’ll last longer and that you have to slice them thinly (which is perfect for me). Both were very tasty and not too dry, the duck was fattier (because of the thick layer of fat) so that layer has to be well-scored so the salt can penetrate it better … Voilà !

*Give it a try. The holiday season will soon be here so it’s a great appetizer idea. We’ve been eating some every day for the past week and we’re alive & well so you can trust my technique and recipe.

dry-cure mix for each piece of meat :

wet-cure mix  (or brine) for each piece of meat :

for brushing/basting each piece of meat (after 24-36 hours of salt-curing) :

note : if you don't have a balcony or a cellar and you use the fridge, curing & drying will last 3 weeks 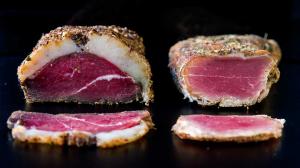 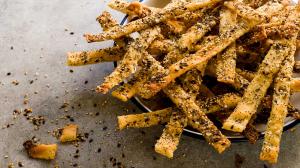 "So this is what happens when you start off making a 24-hour rise sourdough-style (my fake version without a starter) pizza dough for 2 pizzas. And then your schedule changes and you’re...