A feeling of déjà-vu ? Well, here’s a reinterpreted Greek version of the famous Portuguese “pasteis de nata” custard tartlets as well as the French “flans pâtissiers” and the British “custard tarts”. It’s an easier and crispier version because the crust is made with 10 layers of buttered filo sheets and the custard cream is slightly richer because of the evaporated milk used instead of whole milk and more aromatic due to the addition of a few extra flavors like citrus peels, bay leaf, cloves and nutmeg.

They aren’t better than the originals but I have more fun making these because it’s like an elementary school project, drizzling or brushing butter on large sheets, sprinkling them with icing sugar and layering them one by one and cutting up squares that will become the sturdy and crispy flower-shaped containers to hold the creamy custard.

A genuine custard is a heated milk base thickened with a slightly sweetened sugar and egg yolk mixture but there are different types of custards with different names and it would require a full post to explain all of that but let’s stay simple so I can be brief.

A thin pourable custard or “costarde” as they say in Québec, is called a “crème anglaise” in France. A thicker custard that is only thickened with egg but usually just the egg yolks is a true custard. A thicker custard that holds its shape, with the addition of cornstarch or flour is called a “pastry cream” and when other additions are added, like a meringue, whipping cream, gelatin, butter, etc., it adopts different names for the different purpose and/or uses and is usually used when cold and firm and not re-baked.

The custard cream used for this version, is closer to a “crème anglaise” consistency, because it’s thinner and pourable and will be oven-baked later on, but it’s also thickened with some cornstarch, like a pastry cream but is not thick or firm until after it is baked. I guess there are as many versions of custards as there are uses for the different versions but they’re all sweet and tasty.

The main difference with this version is that the original Portuguese and French versions will develop darker almost charred or blistered spots on the custard surface while the Greek version, like the British version gets darker spots only at the tips of the crust and the custard cream remains lighter and golden in color.

Anyways, here you are with a beginner’s version to try before we decide to tackle the original versions, so go ahead and have fun with it … :) 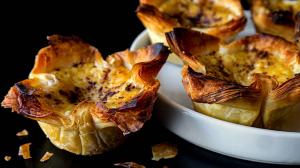 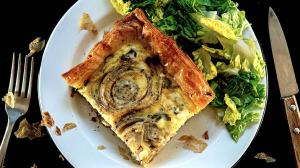 ONIONS are not just something to be added to dishes as a flavoring. They can be the star of the dish because they’re flavor bombs, especially after partly roasting.  Just as a PIE CRUST...