A “USE EVERYTHING & WASTE NOTHING” hearty WINTER MEAL, resembling a lasagna (but there’s no pasta here), with winter vegetables and some chicken. All the ingredients are pre-roasted before assembling them, using only 1 mixing bowl, 1 roasting dish, 1 casserole and 1 baking sheet and nothing else (okay, it’s true that you’ll have to wash the casserole once before using it twice) and with its own “in-house” broth for its own special chicken-vegetable béchamel sauce and also its crispy crushed chicken skins topping, sprinkled on top of the cheese ...

I know it’s nothing “fancy”, but I’m quite proud to say that this preparation is the least wasteful possible and uses every bit & scrap of food wisely ! The vegetables are all in there and their scraps are used to make the broth. The meat of the chicken thighs are also in there, the bones are used in the broth and their skins are used as a crushed crunchy topping (with the cheese).

Why a broth ? Because the béchamel sauce, that is usually a thickened milk mixture is actually half chicken & vegetable broth, so this adds extra “chicken soup” flavors to this hearty dish.

I even used the roasting dish filled up with all the raw ingredients as a measuring tool to figure out if I’d have enough ingredients for the whole thing, taking into account that after the initial roasting, i’d be left with half the volume, but that remaining volume/space was going to be filled up with the béchamel sauce, followed by some beaten eggs (optional but nice), then the grated cheddar cheese and finally the crispy and roasted chicken skins (like chips) that are crushed.

It can be made in several stages, with resting time in between (if needed because you’re so busy/lazy). It can be made a day in advance and baked later. It can be reheated (covered with aluminum foil)and can last for several days. It’s just SO SATISFYING (like an almost- lasagna can be) but with many more vegetables, very little meat and less fatty and starchy. SATISFIED ?! 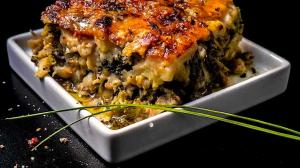 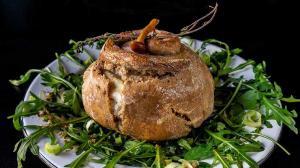 This is a BREAD & CHEESE BOMB so BOOOOM !!! What could be better than  a "reinterpretation" of a CHEESE FONDUE (hot and melty) with some great BREAD (warm...