When an unintended but quickly modified and rather easy dessert idea becomes perfection in its simplicity ! Yes, I am proud of this accident, which is why I tested it again and why I’m sharing this crunchy, fruity and gooey baklava-style apple dessert with you.

I had planned to prepare something different. It was going to be a small spiral apple pie using filo sheets (of which I had 8 sheets in the refrigerator) instead of making regular pie dough or puff pastry for the apple filling.

I had prepared everything, planning the weights and proportions. I knew I wanted equal parts of filo dough and apple slices and half as much butter and sugar, and of course a few extra flavorings.

I wanted a syrup too, to drench the dessert, once it was baked and I preferred getting it directly from the marinated apples slices which were going to release their liquids, instead of opening up a bottle of apple juice.

Everything seemed okay until I tried shaping the rolled apple and filo sheets assembly into a tight little spiral to fit into a small enameled baking dish but I started seeing tears. The apple slices were too thick and the filo couldn’t be spiralled that tightly, so I patched them up with a bit of filo and melted butter, but that wasn’t going to work for a tight snail-like spiral shape.

I quickly rummaged through the cabinets for a bundt pan that would allow me to curve the rolled assembly without tearing it apart. My filo and apple assembly was almost long enough to make a doughnut shape but I had to patch up the small missing gap with extra filo. If I had known this was going to happen, I would have used a measuring tape and measured the circumference of the bundt pan and planned it out mathematically. This is what I did the second time.

Thickening the remaining apple & sugar liquid was always my intention but adding the cornstarch wasn’t, but it works perfectly, binding it all into a syrupy and glossy glaze, with a little apple brandy and vanilla to boost it !

And the flaked almonds ? That was just a last minute idea. And why not add a few tablespoons of almond powder to the strained apple slices ? Maybe next time ...

Just to be clear, the very thin apple slices are marinated in a mixture of sugar, lemon and lime juice and some cornstarch until they release their juices, become softer, stickier and easy to bend so they can handle being curved.

The resulting liquid, like sweetened apple juice, is saved, because later, part of it is used, boiled down with some extra sugar and thickened until it becomes the glazing syrup of the dessert.

Don’t forget to measure the outer circumference of your bundt pan with a tape measure and create a large and wide filo sheet assembly of that length, overlapping and layering the sheets with melted drizzled butter.

I’ve given you very precise measurements, but a little more or a little less makes no difference in the end. Fill it up, roll it up, sprinkle it, bake it, pour the syrup over the baked apple and filo pie, let it cool down a bit, invert it out, flip it upright again (and not upside down) and you’ve got yourself a lovely and simple dessert. 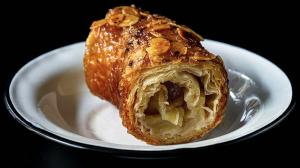 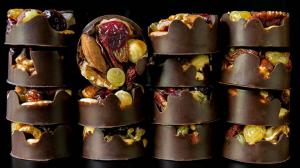 I’m so sorry kids (from the youngest to the less young too), but there will be no door-to-door trick-or-treating this year, so all you older and wiser parents and grandparents or...