MANY OF YOU ARE FAMILIAR with "FOIE GRAS" & SOME OF YOU ARE NOT … SOME OF YOU LIKE IT & SOME DON’T ... SOME LIKE IT and ACCEPT IT & SOME USED TO LIKE IT BUT NO LONGER EAT IT NOW ... it's CONTROVERSIAL !

«FOIE GRAS» which literally translates to «FAT LIVER» is a culinary delicacy made from the liver of a duck or goose, that has been fattened through force-feeding. This technique has existed from Ancient Egyptian times to Roman times but is most often and customarily considered to be a symbol of Southern France’s and Northern Spain’s traditional cuisine, especially during the winter holiday feasts.

While mostly produced and consumed in France, «foie gras» has been banned in some parts of the world.

Food isn’t always easy : there are forbidden foods and taboos, cultural and personal food preferences and choices (sometimes physiological and otherwise ideological), questionable production methods and techniques (whether ancestral or modern), health and safety issues, and of course, more and more of today which I’m glad to see : the issues of animal protection and/or animal welfare.

It isn’t easy to post a recipe that will inevitably offend some of my readers but I’ll explain my point of view.

Eating things that were once alive cannot ever and should never be an insignificant thing. One should not transform nor perceive food consumption and eating habits as some pre-packaged and sanitized harmless abstraction. Food is the result of a sacrifice, sometimes necessary but most often optional. Be grateful for the loss that your gain represents.

There are more ‘humane’ (less cruel) methods for making «foie gras», especially in certain parts of southern France and northern Spain where many farmers have adopted and/or converted their intensive force-feeding practices into gentler and more responsible techniques. These farmers tend to sell «ethically-produced» foie gras, usually smaller in size and sometimes even organic. Products from small farms will always be a better choice and more ethical and fairer than those in a supermarket and if not, then at least ask your butcher about purchasing a less cruelly-produced raw and hopefully de-veined ‘foie gras’ duck or goose liver. I know it’s not often that we eat foie gras so a little extra effort once or twice a year isn’t much to ask.

*back to the recipe & techniques :

a. oven cooked in a covered ceramic terrine, half immersed in a water bath

b. wrapped up in plastic film and steamed in a long tubular shape,

c. wrapped up in gauze and cured for several days in a salt mixture.

b. takes slightly longer to do than (a), results in a simpler thick sausage shape for eveny-shaped and round slices for serving

c. my personal favorite, no heat nor cooking, a slower process for a more delicate, buttery, smoother result but requires 5-6 days resting period.

Traditionally, foie gras is served slightly cooler than room temperature, with toasted thin slices of bread, usually brioche or gingerbread and accompanied with a heavy and a slightly chilled, fruity, very sweet and stronger wine called « sauternes » (like an ice wine), and sometimes a little spoonful of fig jam/confit on the side.

Anyways, my « foie gras mi-cuit » version (which means ‘partly-cooked’ because it’s salt-cured) was designed in such a way that the spiciness and sweetness usually provided by the accompaniments of the sweet wine and breads and fruits is actually incorporated in the foie gras because I prefer the accompanying drink to be something bubbly and lighter (such as champagne or cider) and a more rustic dried fruits & nuts bread to spread it on (see recipe here), with no other extras please !

note : usually, a salt-cured foie-gras (as opposed to a cooked one) is meant to be eaten quickly after it is ready or a maxiumum of 2-3 days after it is ready, using the pink curing salt prolongs its expiry date by at least 1 additional week, but is not necessary if eaten over the first 2-3 days when ready ... 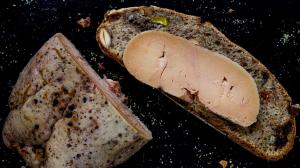 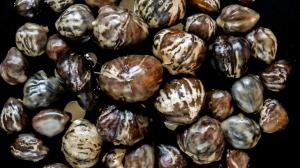 No, you’re not mistaken, this recipe takes 7 DAYS, and they’re officially called “MARRONS GLACES” . . . even though “mine” resemble small stones and seashells of...