The holidays were GREAT, the eating was FANTASTIC and the drinking was AWESOME. The PARTY’s over. Time to pull yourself together and detoxify (yeah, again) ! I can’t decide if it’s fashionable, (or not), to detoxify your system (and admit to it). Even though it isn’t not cool nor sexy (in my world), your body (and mine) are probably demanding it.

You obviously haven’t been waiting for this vegetarian recipe to pursue this necessary post-holidays quest, all on your own, like big boys & girls, but here’s a little encouragement, as I did 3 years ago with the detox-12 hot herbal drink (see recipe here) which I think is probably the simplest & fastest recipe I’ve ever published (and prepared and photographed and typed up in 2 languages in under 2 hours) and yet the most popular and the most viewed ! HMMMM … confusion.

9 ROOT-VEGETABLES. I’m not 100% sure that all the main ingredients here officially qualify for that ‘terminology’ but whether they are bulbs or rhizomes or tubers or true roots, they’re all from the dark, moist and fertile UNDERGROUND world. They'll do your body some good.

Slice all the root vegetables thinly.

Toss them with olive oil and salt & pepper.

Transfer them to a soup pot.

Prepare a not-so-fancy yet delicious taste-enhancer and thickener called AVGOLEMONO sauce (usually made with egg white, egg yolk and lemon juice, but try to use some lime juice instead, which I guess makes it an AVGOLIMONO sauce).

GOOD LUCK to YOU & YOUR BODY (which sometimes are united as one, but  often make two). 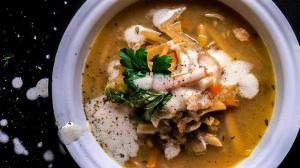 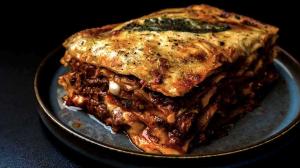 This "L-A-S-A-G-N-A" may be ultimately DECADENT & SHAMELESS in its creation, and perhaps INDECENT & SHAMEFUL in its consumption … but for me,...