FASOLAKIA are green string beans and LATHERA means with oil, because when making this meatless version, the extra virgin olive oil gives it both taste and body. My version also adds beer as well as yeast extract to give it more body and I roast the vegetables before adding them to the tomato base, making this simple stew into something exceptional, as I’ve surprisingly been told by many.

Most Greek kids grow up eating this dish. It’s easy, vegetarian, healthy and inexpensive and usually prepared in 1 large casserole in under 2 hours and feeds many. It’s a stew in every sense of the word. Unfortunately, everything is usually over-boiled and too soft (almost mushy) and we liked it of course but didn’t necessary love it either.

Here’s a better way to make it, by partly roasting the vegetables separately, before adding them to the stew at different stages, to create an even better and more satisfying version where the vegetables are tender and tastier and hold their shapes beautifully.

I didn’t know that my version was so satisfying until many people (both older and younger) who had tasted our parents’ versions and mine, brought it to my attention and questioned me as to why it was so particularly better than what they had known and eaten before. I’ve made this dish with meat before (see recipe version with meat here) and I’ve altered my recipe for this vegetarian version which is just as satisfying and filling.

The newer ingredients here are the beer, which replaces the more traditional white wine and then there’s the yeast extract spread. Marmite and vegemite are the best known brands of this condiment. It is a dark and salty syrupy paste made with fermented yeast, used to add flavor to savory dishes. I’d say it’s the European version of miso paste or soy sauce and I use it in all of my broths for soups and stews. It adds depth without adding meat, since it is vegan and packed with vitamins too.

The end result, even though requiring more time to prepare, is delightful … :) 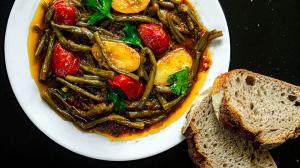 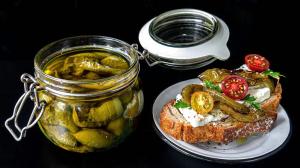 For all the lovers of GREEN PEPPERS, who are so often ignored because we are so few and forced to enjoy only sweeter roasted red peppers (also great but different), here’s an easy way to enjoy...