This dish is called “FASOLAKIA ME KREAS” in Greek and is usually prepared in just one casserole, gently simmering for several hours until so tender that it melts in your mouth and actually becomes a liittle too mushy (if you’re not attentive during the long & gentle simmering) . . .

In the summertime, we often make it without meat, with even more added fresh herbs such as dill and mint. In the winters, we add different types of meat, sometimes chicken or turkey, beef, quite often with pork (that is fattier and goes well with beany-type stuff) and sometimes  meatballs too (yummmm) !

The only 'problem' with this dish (and I mean not a problem to Greeks but to non-Greeks) is that when the dish is prepared traditionally, it’s rather mushy and thus difficult to serve to non-Greek or ‘fasolakia’ aficionados who are used to this 'softness'.

All I did here (respectfully I hope) is to reinterpret the dish by respecting the overall flavors but playing around with the textures so that everything still holds itself together (and remains quite presentable) without getting too soft, too tender, too mushy, too liquid.

I prepare everything in steps, the meat, the marinade, the tomato sauce, the roasted vegetables, mix it all up together and there you go !

p.s.: a little funny story because it's Friday the 13th today, for Greeks the whole superstitious day thing is actually Thursday the 12th, LOL !

for searing the meat : 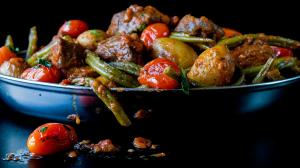 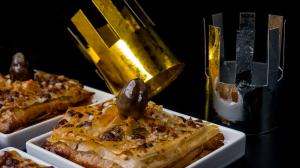