I went to MARSEILLE. I came back from MARSEILLE . . . with a HUGE BAG OF FRESH FRUITS AND VEGETABLES. They were being sold in the Gare Saint-Charles train station by local organic farmers who are there every Tuesday and Thursday afternoon and it’s not expensive. I got some huge beefsteak tomatoes, a bouquet of baby artichokes, heads of garlic, a bag of cherries, a muskmelon, some flat-leaf parsley, cucumbers, a fresh oregano plant and of course, ZUCCHINI (OR COURGETTE) FLOWERS (the female ones because the blossoms still have a young zucchini still attached to them) . . . and the “window of opportunity”to get these blossoms is really short, from the beginning of June in some places until the end of June in others, before becoming a full-grown zucchini later in the summer !

I love that city. I’m lucky enough to go down once or twice a year in June and July for work. It’s also a city to definitely take into consideration if and when I ever decide to move from Paris (which is an expensive city to retire in) and I decide to stop at the sea border of France while heading southwards.

It was an ancient Greek port city, before becoming French, trading with all the Mediterranean countries and very prosperous in the past. Today, it’s a bit run-down, very multi-cultural and working-class in most older areas, while very recently becoming very modern, developed and wealthy in some renovated areas. Yes it’s risky in some places, but joyful and sunny everywhere. The sea is at your doorstep. It has a grittiness and vibe similar to New York in the late 80’s-early 90’s. The streets and buildings are colorful and smell of delicious cooking. Fish and seafood are sold everywhere. The fruits and vegetables are locally grown. People like to hang out and take their time, without too much rushing.

These delicate things that zucchini blossoms are (with the baby zucchinis still attached) are so easy to prepare (if you’re not growing them yourself and are willing to sacrifice their development into much larger fleshy zucchinis without the blossoms, by waiting a few more weeks). It’s an early summer appetizer ritual in many southern European countries, probably better known in Italy as “FIORI DI ZUCCA RIPIENI FRITTI” or stuffed & then fried zucchini flowers.

All you need is 18-20 of these precious things (I only had half but I adapted the recipe for 18-20), some thick and creamy mixed herbs & cheeses mix to stuff them, some light and airy batter to dip them in and a lot of oil to fry them in.

TEMPURA batter (which was actually invented by the Portuguese living in Japan in the 16thcentury) is a simple mixture of 1 part dry ingredients : flour with some salt and baking soda and 2 parts liquid ingredients : sparkling water preferably (so you don’t need to add the baking soda), combined with some oil and some egg white, but I added the wheat semolina and the alcohol because it evaporates quicker and fries crispier. You may end up with extra batter because it’s easier to dip things             in a larger quantity but just use up the extra with other seafood and sliced vegetables you can prepare and deep-fry too.

They’re simple to make, enjoyable to eat, extremely seasonal and a definite “show stopper” for your friends & family, so enjoy them while they last. 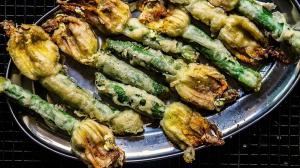 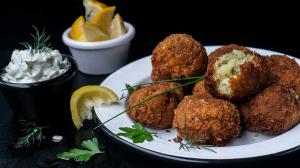 A re-adaptation of a recipe for BOLHINOS DE BACALHAU from Portugal (and perhaps similar versions in Spain and probably Brazil too). I’ve been jumping from country to country in my latest recipe...