… an updated & foolproof version with a logical approach for making an even better traditional Greek sweet bread for the Orthodox Easter festivities.

The idea behind this recipe and instructions, after meticulously analyzing my own family’s traditional recipes and comparing it to other existing and successful recipes was to create a version that seemed logical (mathematically speaking) and easy to remember, providing the best results possible, even after just a first try, that you could decide to slightly alter later, according to your own personal tastes and/or memories.

TSOUREKI is a Greek lightly sweetened bread or dense brioche, always made at Orthodox Easter time, which this year is on May 2nd, 2021, but it is also often prepared during other holiday seasons and throughout the year too, by most Greek bakeries, in all shapes and sizes, due to its popularity.

Tsoureki can be compared to Southern France’s Brioche des Rois and Fouace, Italy’s Pannetone and Pane di Pasqua, Spain’s and Algeria’s Mouna, but the Finnish Pulla Bread and the Jewish Challah are most similar to Tsoureki but mostly because of their stringy textures and of course many similar versions with slight taste variations exist in the neighboring Balkan countries, Turkey and until far-off Armenia, called Chorek, which is the closest cousin to what we Greeks define as Tsoureki.

Each family has at least 1 or 2 recipes, modified over the years to present-day availabilities of ingredients and methods. It is always prepared in large quantities, usually requiring at least 1 kg of flour to make enough for the family, to offer some as gifts and of course to inevitably compare all the tsoureki that you’ve made and received from others and eaten to judge which is the best version that year, because every year is different and there’s always someone who made a better version and one will always be congratulated and asked what they did differently to make it so exceptionally good this year. Tsoureki is traditional but not static and does evolve.

The main flavors or aromatics can vary but most often will include mostly ground mahleb stones (tiny pits from a small black cherry) with its almond and cherry aromas, then half as much mastic resin which gives the sweet bread a bittersweet and fresh resinous scent, a hint of cloves (usually added whole to the dough, then removed after the first kneading because it darkens the dough a bit but I prefer to finely grind the whole cloves and to include them all, even though it does darken the dough) and orange zest and orange juice, some vanilla, sometimes with just a hint of fennel or anis seeds too, but those are mostly regional variations.

Here are some substitute aromatic ingredients you can use if you can’t get mastic resin crystals which are expensive, try replacing them with 2-3 crushed juniper berries and 1 cardamom pod, well ground with some sugar. In order to replace the mahleb stones, try using ¼ tsp of almond extract mixed with 1/8 tsp of cherry extract. Finally, if you don’t have ouzo or other anise-flavored drink (like pastis), try replacing it with a floral gin and a few ground seeds of a star anise pod.

There are two typical shapes; the braided version with represents the wheat stalk but is actually the crown of thorns, sprinkled with sesame seeds or flaked almonds on top to represent the thorns themselves (so they say) and the single spiral or snail shape and sometimes a double spiral, representing resurrection and life, which is my optimistically preferred shape and which I prefer without any extra adornments or garnishes, simply smooth and unmarred. Today, people also make smaller tsoureki muffins.

Adding a pre-boiled and red-dyed Easter egg in the middle of the dough braids or spiral is traditional, but only at Easter time.

My humble attempt and version is to recreate a version that combines the aromas I prefer and seem to remember and the moist and dense yet stringy texture of many sweet breads I’ve enjoyed.

This version respects traditional methods and the flavors and is easy to remember and as delicious and moist and as stringy as possible. I make a medium-sized batch using only 500 grams of flour, which is easy to work with and perfect for a first attempt that you could easily double for the next time.

It could have been called TSOUREKI NUMBER 6 because I tried several variations by modifying the ratios of the main ingredients and tested it several times before deciding to share the winning recipe with all of you.

The main ingredient is the flour and there exists specific flour especially used for tsoureki, but it will be hard to find. It’s finely ground like cake & pastry flour but with a very high gluten/protein content which is between 14% and 15%. Pizza flour or tipo 00 flour or Brioche flour are excellent and easy options but more expensive, but I simply used organic unbleached all-purpose flour which only has a 12% protein/gluten content to which I added wheat gluten powder to increase it to almost 15% protein/gluten, just like a hearty whole meal bread flour, but ground much finer. Simply remember that if you add gluten, you’ll remove an equal amount of flour first. Another great addition is malt extract powder, made from fermented barley, which adds depth and flavor and feeds the yeast because it’s slightly sweet as well as further developing the crust, but that’s up to you. For special baking purposes, bakers usually add 1 tsp of malt extract powder per cup of flour used by substituting it for 1 tsp of regular flour, that they will remove. I sometimes use only 1 tbsp for this recipe, if I have some handy. All of this is further explained in a note in the instructions, if you want to use gluten and/or malt extract powder.

And once again, if you add either gluten or malt powder or both, do not forget to remove an equal amount of flour too because they are and act like flours, but are used sparingly. You’ll add some salt of course and you could include just a little bit of baking powder which is a little trick and simply serves as an insurance policy to guarantee that the tsoureki gets that little extra push during the baking process to become as fluffy as possible.

I admit that this recipe includes non-traditional ingredients too, like orange blossom water and ouzo, but once all combined together, their chemistry recreates the subtle flavors that I seem to remember as being my favorite.

The hand-kneading and the balance of the ingredients provides me with the texture I prefer, both moist and dense yet stringy like a more compact brioche or baguette can be.

You will need an almost equal weight of flour (500 grams) to the totality of the rest of the ingredients (518 grams) or 4 cups of flour to 2 cups of all the secondary ingredients (milk, sugar, eggs, combined butter and oil), with an extra ¼ cup of ingredients that includes the fresh yeast, the citrus zests, the crushed dry aromatics (mastic resin, mahlab, cloves) and the liquid aromatics (orange blossom water, ouzo and vanilla) and salt.

Hand-kneading (3 times) strengthens the dough and provides better results and is easy to do when you do it with oiled hands and no extra flour will be needed nor should be used. And if you have no gluten to add, then I suggest you knead the dough a lot, which will build up the dough’s strength and elasticity, like gluten does. If you have a machine that does the job just as well, go right ahead but I think that tsoureki dough prefers the warmth of caring hands.

Fresh yeast provides better results because it’s so lively but you could use half as much dry yeast if it’s particularly active, but I find it takes longer to rise, even if you use more than half, so if you must, use 15 grams or 1 ½ tbsp of dry yeast, but at least try to get a cube of fresh yeast for the best results.

The honey syrup glaze, instead of the more traditional topping of flaked almonds or sesame seed make the tsoureki seem simpler and more contemporary in its aspect and gives it a beautiful shiny gloss but also traps in the moisture so it stays moist for 1 week without being sealed in a plastic bag, just a metal tin or plastic container will do, to store it perfectly. And of course, the honey syrup glaze sweetens the crust so if decide not to glaze your tsoureki, remember to add 2 more tbsp of sugar to the basic dough.

The optional fillings of the chopped candied or caramelized almonds and diced candied citrus peel add a little surprise as you eat it and compensate for the lack of toppings but it’s just as good without them and a lot easier to prepare without that extra step that takes some time. On the other hand, I’ve noticed that when the fillings are added along the middle and inside the logs before spiraling them, the tsoureki puffs up and retains its rounded shapes because the fillings act like a spine or central reinforcing element.

There are baking options too. After testing it, I discovered that preserving the dough’s humidity is important at the beginning or during the first half of the total baking time. Covering the sweet bread, for the first half of the baking time, in its baking pan with an aluminum foil tent or a lid or an inverted plate, or if it’s on a baking sheet, by placing a large inverted salad bowl or an inverted deep baking dish on top allows the dough to puff up before the crust sets and solidifies and sometimes cracks. A pan or dish of hot water, on the floor of the oven, that evaporates and creates steam as the tsoureki bakes is also very helpful and you could do that also or instead. Then uncover the sweet breads for the second half of the baking time so it gets darker and golden and fully baked.

I’m very proud of this recipe because I can remember it easily, even though it’s better to weigh the ingredients, which are perhaps too precisely noted here but there’s no problem if you stray a bit and round off the numbers or just use cups and tablespoons and teaspoons to measure everything without weighing anything. It should be fine.

*This recipe is exactly how I like my tsoureki to taste but feel free to increase the liquid and/or dry aromatics and the zests and the sugar by up to 25% after your first trial. It won’t affect the rest of the ingredients and will be more intense in flavor, if that’s what you prefer, because let’s be honest, the truly best tsoureki will always be the one that you prefer, no matter what anybody else likes and/or says.

traditional «tsoureki» for the 21st century

dry aromatics (5 grams without the sugar for grinding & 12 grams after grinding with the sugar) :

toppings options for a more traditional tsoureki (instead of the fillings) :

traditional «tsoureki» for the 21st century 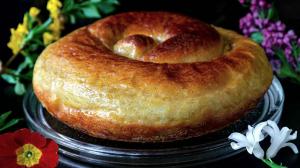 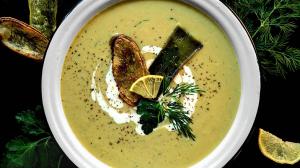 A humble wintery cream of leek and potato soup can be brightened up with springy lemony & herby flavors and dressed up with windowpane (or sandwiched semi-transparent layers of) oven-baked crispy...