SATURDAYS. I’ve always loved this day, even when we were kids and had to go to Greek School one weekend day per week, after five weekdays in “regular” French & English school in Montreal.

Before my parents got a car, we’d take the bus and subway with my father, back to our old neighborhood in Mount-Royal (which was almost downtown) to spend the day in Greek school. While we were in school, my mom would be at home and my father would do the weekly food shopping and go see our uncles and his work friends, maybe play some pool and have coffees and something to eat and then pick us up, treat us to some steamed hotdogs and fries or souvlaki pita sandwiches or maybe some smoked meat sandwiches that we would eat downtown. Later, when we got a car, we'd make a pit-stop while driving back and on the way home, we would pick up stuff from McDonalds and/or Kentucky Fried Chicken (which was really good in the old days) or our favorite pizza place and we’d take everything back home and eat it with my mom.

Today as an adult, I enjoy sitting down on the couch on Saturday mornings and typing up the recipe that will  be posted on the weekend. But of course, this happens after putting away all my stuff from the previous work week, getting all the final paperwork sorted and typed up and sent off, doing some laundry (later to be ironed), some shoe-shining, preparing the weekend meal-plans and preferably finishing all this before the official weekend nap, with the recipe sent off after getting up.

*Yes, I do continue to get up at dawn, even on the weekends.

I like posting on Saturdays, because I have never ever considered this day to be a holiday, but just a more pleasant, quieter and slower-paced, easy-going work day. I’m never “idle” because I don’t know how to be “idle”.

The recipe is a Greek-inspired dip. It’s difficult to name it though.

All of you know the TZATZIKI yogurt-garlic-cucumber dip. Some of you know the dips made with FETA cheese but there are 3 in all : TIROKAFTERI which mean spicy-hot cheese dip, KOPANISTI which mean beaten dip (and very similar to the first) which both include some chili or hot peppers and finally KTIPITI (sometimes spelled HTIPITI) which means scrambled or whipped but which always requires red roasted peppers and oregano (you can see my recipe here).

I’m not sure if this should be called TIROKAFTERI or KOPANISTI or something else ?! My version combines strained greek yogurt, feta cheese, a pureed or blended and very well-strained mixture of sweet green peppers and some green hot pepper with some green onion, so it’s both quite spicy-hot and very whipped and creamy.

It has a particularly strong and fresh “green” flavor and a very pale green color (so it’ll work for Saint-Patrick’s Day too). You have to strain the yogurt beforehand (which I prefer to use instead of adding milk or too much vinegar or lemon juice), whether in a cheesecloth (overnight) or more quickly and tightly squeezed in a kitchen towel to extract at least one third of the initial weight of the yogurt in whey-water and the same thing is done with the vegetable mixture, first chopped, then pureed with the salt and vinegar and then pressed and/or strained in a sieve to extract half the total initial weight, in liquid or juice. And then you add the feta cheese, olive oil, lemon juice and garlic and some optional fresh herbs and white pepper and blend until smooth. And if it’s too thick and dense to your liking, or not spicy-hot enough, then use some of the strained and very flavorful and spicy extracted vegetable liquid to thin it out.

By the way, I keep this greenish magical, so flavorful, sweet peppery and spicy liquid in a small bottle, to also flavor other dishes too . . . :) 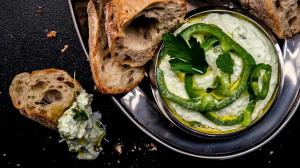 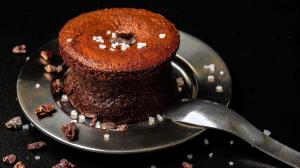 Are they chocolate MI-CUIT (which means half-baked) cakes ? Chocolate LAVA or MOLTEN cakes (as we like to say in North America) ? Or GATEAUX AU COEUR COULANT (which means cakes with a runny &...