I use these heirloom tomatoes like a "spell that I cast", to bring back the almost non-existent Parisian summer that eluded us this year, while the sun continued relentlessly hammering so many other countries ! Needless to say, I bought these beautiful heirloom tomatoes at the outdoor market.

And to top it all off, my father in Montreal has harvested over 100 tomatoes on 8 vines, with probably 100 more to come, while I barely have 6 on two vines, with only 2 that are ripe for the picking ! The seasons we knew seem to have shifted and delocalized.

For this recipe, I kept adjusting the resulting flavors with a pinch of this and a handful of that, until the stuffing tasted just as I wanted. It is also when I realized that the fennel bulb sitting in the refrigerator was begging to be used, as well as crushed fennel seeds, which work so well with tuna and tomatoes. And of course, a little celery and carrot to accompany the onion and garlic is always an excellent base for most dishes.

A little bit of anchovy and black olives also go a long way in adding depth and a certain briny saltiness to the stuffing so don’t forget to add them in and then use whatever fresh herbs you like to brighten up the flavors.

And what about BULGUR ? I have a bag of it but rarely use it, just like I used to do with those magical grains of COUSCOUS that eluded me for so long, but that I do use more often now and that still fascinate me. You can use rice for this stuffing instead but bulgur, that is made of cracked wheat  but it’s a nice change, and let’s not forget that there is nothing more Mediterranean and ancestral in this part of the world than wheat, olives and grapes (for wine-making).

The potatoes are little extras to round off the meal but to also prop up the tomatoes and stop them from collapsing sideways.

It’s an easy meal to prepare, ahead of time if you’re like me and like organizing your weekly meals or start 2 hours before dinner time, (oven-baking time included) if you’re more of a free-spirited and last-minute cook.

Anyways, give it a try while tomatoes are in season and at their best, perhaps not in my Parisian backyard garden, but everywhere else where the sun graced them with its presence and warm smile … :) 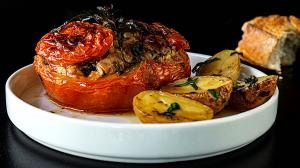 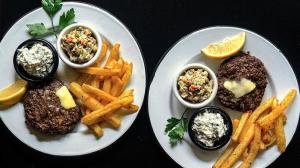 It’s a good time to show you this improved recipe for northern Greek BIFTEKI since it’s my dad’s 85th birthday this weekend and he’s healthy, strong and happy and...