Here’s a reinterpreted soup from my childhood days growing up in Quebec, Canada where it is still very popular and available in every restaurant but pea soup is international and existed in Ancient Rome and Greece around 500 B.C. and was even sold in the streets by vendors during that era ! Could this be the most ancient soup in the world ?

It can be vegetarian or non-vegetarian and is most often cooked with different types of salt-cured pork cuts but I’ve presented both options here, with meat and meatless, carnivorous or vegetarian.

The soup base for both versions is the same and only the garnishes change. The light version highlights the use of fresh herbs and more lemon while the other version is a meatier version with a spice-encrusted slab of salt-cured pork belly (like very thick bacon) that is oven-baked until crispier. You can also decide to simmer the soup with more salt-cured pork for a meatier taste but I prefer the contrast of just using it as a garnish.

Both versions are delicious and I assume that the version with its carnivorous garnish would be better suited to the colder autumn and wintery months while the lemony and herby version is more for spring and summer.

Cooking times may vary depending on the split peas you use and some varieties can be tender after 60 minutes of simmering but it could take up to 2 hours so give the soup the time it requires to be fully cooked by simmering it gently or soak your peas beforehand if you already know that they take longer to cook.

The secret to any good soup is the broth, whether home-made or store-bought. I always gather up all my extra vegetable cuttings in a bag that I store in the freezer and once that bag is filled up, I’ll make a broth that I will freeze when cooled down or store in sterilized jars when still hot.

Bundle up because it’s cold out there and enjoy a nice bowl of soup that will soothe your soul … :) 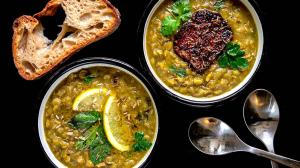 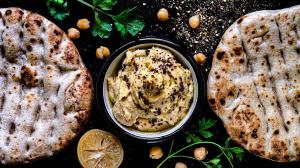 It’s getting colder out there, folks are still staying home a lot and inviting friends over more often and hummus is often served, being one of the most popular Mediterranean and Middle Eastern...