SPA-NA-KÒ-RI-ZO (it just means spinach with rice in greek) . . . I hadn’t actually tried making this simple meat-less peasant dish myself that I grew up with, until a month ago and usually only having it when I visited my parents in Montreal. A friend’s wife asked me for the recipe a few months ago so I called my mother and this was my understanding of my mom’s abstract re-telling of how she makes it using no precise measurements except for a coffee cup and her fingers as measuring instruments, which is how things work in her magical world of ‘old school’ experience and know-how. She really is a wonderful and insightful cook.

I was actually worried the first time I made the spanakorizo at home in Paris, thinking that this type of dish could only be appreciated by those who grew up with it. I was wrong. Everyone who tasted it loved it (whether hot or cold) and they started imagining it combined with their own culinary references even though I could only imagine it as a main dish with a big dollop of well-strained and thick greek yogurt, lemon slices and maybe white meats like poultry or fish (if you prefer it as a side dish) but I’ve been known to be wrong sometimes. I’ve been making this recipe  once every 2 weeks now.

For some, this is still a week of meat-less “fasting” because Orthodox Easter is actually this weekend. Some actually go meat-less for 40 days while others reserve the meat-less part just for that last week before Easter. What a long, long, long time ! And yet I’d like to do more vegetarian dishes (and not just because of this pre-Easter week) so I’ll give it a spin and try posting more vegetarian recipes soon.

Don’t be surprised at the quantity of fresh spinach required (you can scale the recipe down to half) but once cooked it becomes much less voluminous (and I like chopping the tough stalks and adding them in because they’re actually more flavorful than the leaves). The quantity of herbs required seem like a lot but it makes it delicious, just try considering the herbs as additional greens and not just flavorings. The short-grain rice as opposed to medium or long grain keeps the whole think neat and not pasty nor mushy.

I slightly modified my mom’s recipe because I felt that some added celery and a splash of ouzo (a dry anise-flavored aperitif) could be nice too . . . What do you think ?! 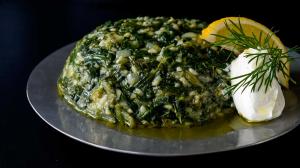 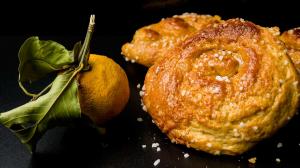 PULLING APART THE LAYERS & NO SLICING, PLEASE ... that’s all that matters to me when eating this type of sweet aromatic bread, whether rolled, braided or twisted. The mere...