A multi-step approach to make an earthy, autumnal and vibrant cream of mushroom soup, with layers of flavor and intensity, due to the combination of the simmered as well as the roasted and also fried ingredients, recombined and tamed to become a comforting soup, through its smoothness and its creaminess.

As the title suggests, there are 4 parts to this recipe, half taking place at the same time and the other two, one after the other and finally combined.

The first times I prepared this, it was simpler, without the oven roasting step and the result was quite simple too. The roasting step changes everything and elevates this soup to another level.

The broth is a complex vegetable and herb broth with mostly mushroom stems (so nothing gets wasted) which simmers gently and to which you may decide to add some chicken bones or some marmite yeast extract spread (a vegetarian option) to deepen the flavors, but to be sincere, mushrooms are complex enough in flavor so even without those optional ingredients, it will be delicious.

As the broth is simmering away, you’ll roast the sliced mushrooms, accompanied with some of the same vegetables as used in the broth, but their flavors will be different because of the roasting which intensifies and caramelizes everything and those juices from the roasting process will be added back into the broth for another layer of flavor.

Once the two parts are reunited, meaning the simmered filtered broth with the roasted mushrooms and vegetables and juices, the third part comes in, adding in the different creams and vermouth, so that everything cooks together and the fats combine with the liquids, to be finally blended and emulsified when puréed at the end.

And of course, as a finale, another layer is added, this time as a garnish of fried wild mushrooms, which are a flavor contrast as well as a visual one.

This soup is anything but plain, because even a regular and humble mushroom can be so much more when treated with understanding, love and respect … :) 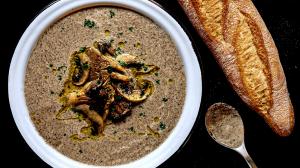 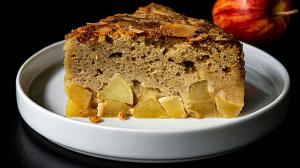 A French-style apple cake is another example of simplified and humble perfection, because it’s like a pound cake (already perfect) with apples. This version uses equal weights but double the...