Here’s a 'recipe request' (which I sometimes entertain) from my sister STELLA who loves SLICED & TOASTED SANDWICH BREAD (particularly a healthy whole-wheat version with seeds).

SLICED SANDWICH BREAD is just one of those things I rarely buy and rarely consume, unless on rare morning occasions of “toast” in the morning with some butter and marmalade or honey (for a sweet breakfast) or with some olive oil and cheese and olives (for a salty breakfast).

SLICED SANDWICH BREAD, that I prefer to call TOAST (because I would never eat such a soft & mushy thing if it wasn’t pre-toasted to develop a bit of a grilled crust with some crispiness) is usually made with flour, water, milk, melted butter, sugar, salt and yeast and (sometimes) an egg.

Because my sister likes simplicity and is too busy to be bothered with too much “fanciness” & “fussiness” and prefers a recipe that she can remember by heart, I decided to simplify and reduce the number of ingredients as much as I could.

When making this type of bread dough, you usually combine the milk with water and melted butter (and maybe an egg) and end up with a fat content of around 11%-12%. This is also what you get when you use 12% cream (or a diluted version with heavier creams mixed with water). This eliminates that one extra step.

I also figured out that the ratio between the weight of the flour(s) and the liquid ingredients (cream & egg) should ideally be around 80% which means that for 375 grams flour, you’ll need 300 grams liquid (or for 500 grams flour, you’ll need 400 grams liquid, etc.). What happens if you want to make 1½ times this recipe ? Should you use 1½ eggs ? Yes, you can, or you can just use 1 egg and add an extra 30 grams water and/or cream. What if your egg is not extra-large or large and weighs only 52 or 55 grams, then just add 5 to 8 grams more water and/or cream or use all of the 2 eggs and subtract some cream … the dough isn’t that fussy (it’ll just be ‘eggier’) but you want to be at 80% at whatever the flour weight is !

Letting the dough rest and hydrate and kneading it several times with the warmth of your hands develops and strengthens the gluten (wheat protein) bonds and creates a dough that is more elastic and that retains its shape when rising and baking.

The shape and size of your loaf pan or tin (whether glass or metal or silicone) is also important ! The first time I made it, I didn’t make enough dough (and my yeast was old and not very active) so the dough didn’t rise upwards very much and didn’t create that nice ‘dome’ or ‘cap’ that rises much higher than the actual baking dish. Rounded corners and the rounded upper edges or lips of the baking mold are also important to avoid sticking and or ripping or tearing. I figured out that if you fill your loaf tin/mold with water up to the rim and record that weight (in grams), then you can figure out how much bread dough to make (ideally at 70% of the total maximum weight in water of your loaf tin). If it measured 1000 grams, then your dough (not including the seeds because they don’t expand) should be 700 grams, If it measures 1500 grams, then the dough should be around 1050 grams, if it measures 2000 grams, then you’ll need 1600 grams of dough.

Be careful with the rise. Doing a “poke-test” is a good way to know if the dough needs more time to rise, is almost ready or very ready and urgently needs to go into a very hot oven, before it collapses ! The ‘poke-test’ is all about simply and gently poking the dough with a floured fingertip and observing its reaction. Does it stay indented ? Does it spring back immediately ? For the second rise, Because the dough expands upwards (because it has nowhere else to go), be careful to brush melted butter on top of the dough too and to place a light (not heavy) kitchen towel on top. I actually have a larger container that is much higher than the loaf tin and has a lid so I put the whole loaf tin inside it to rise (without a towel). Yup, lucky me I have a set of metal enamelware baking dishes (with lids) that are great in the oven, even at very high temperatures.

Give the recipe a first try and adjust it later when you make it a second time. Perhaps you like it slightly saltier and/or sweeter and then you’ll also realize if you need to make more or less dough for that ‘perfect’ shape the next time.

It stays soft & moist for several days and amazingly enough, when you toast it, it smells buttery and nutty ! And it’s for S-T-E-L-L-A and all of you too .

S is for soft & moist bread (with a nice crust too)

T is for tasty (a nice balance between buttery, nutty, salty & sweet)

A is for again & again she will be making it (hopefully because she can often be quite demanding) . . . :)

note : to figure out the correct quantity of ingredients to make this bread for your baking pan and for a successful rise & shape, fill your loaf pan with water up to the rim and record the weight, multiply that number by 0,70 (or 70% which is the average between 66% and 75%) and this should be the maximum total weight in grams of your ingredients for your loaf pan/tin, because the un-risen dough should only fill it up 2/3  (66%) full to ¾ full (75%) and when it will rise a 2nd time, it will be 1 1/3  times up to 1½ times the height of your loaf tin/pan …

note : if you decide to use up to 50% whole wheat (and not 33% as I did) which is a flour that is higher in protein and thus absorbs more liquid, add about 5% more liquid (about 1 tbsp cream or water for this recipe quantity)

note : to avoid temperature fluctuations, I let the dough rise both times inside a cold oven with a drip pan of hot tap water underneath it (but not touching it), which raises the surrounding temperature from about 22°C room temperature to 27°C-30°C in the oven and speeds up the process

*note for the "poke-test" : coat your finger with some flour and poke/indent the dough once or twice, if it springs back quickly, let it rise longer, if it springs back very little or hardly at all, if it’s the 1st rise, then it’s ready to flip out and be re-kneaded and shaped, and for the 2nd rise, when you do the poke test and it springs back slowly and just a little, then start preheating the oven

note : if the top of the bread is getting too browned, loosely place a piece of aluminum foil on top of it after 20 minutes of baking … 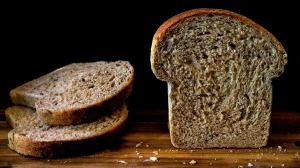 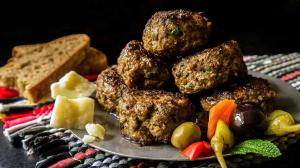 You know when you think people 'know stuff' but they actually don’t ? Fool that I am, I often forget this ! Many people’s culinary backgrounds & experiences are most...