Basic recipes with variations that everyone should know because they’re always part of other recipes, as toppings or as binders for the fillings. And if you follow me, then you know I use them often, so I’d like to make it simple enough to remember without having to look up the recipe all the time and without explaining it (and retyping it) over and over again, every time I use them here.

A béchamel or white sauce begins with just a “roux” or equal volumes (not equal weights) of butter and flour that are heated into a paste and into which you slowly incorporate the milk to thicken it, while continuously whisking. One and a half tablespoons of each (flour and butter) per cup of milk, is customary.

A mornay sauce is a béchamel sauce with the addition of eggs or just egg yolks and grated cheeses, incorporated just at the end, while the béchamel is still warm and whisked until smooth. One quarter cup of each per cup of milk used is customary too.

The liquid doesn’t always have to be just milk (whole milk preferably) because I like using evaporated milk too which is a bit tastier. I sometimes substitute half the total milk with vegetable broth and/or meat stocks too because it works with the recipe I’m preparing and adds more flavor to the final preparation and also allows you to use those extra bones and vegetable cuttings too, to prepare the broth or stock and reincorporate it all right back into the creamy preparation.

For each 1 cup of liquid (240 ml in North America or 250 ml in Europe), you will need at least 1 ½ tbsp of butter (oil works too) and 1 ½ tbsp of flour. Flour weighs half as much as butter so it’s almost double the weight in butter as compared to the flour.

It’s not rocket science either so if you prefer to remember approximate weights versus accurate measured weights then you can just round it off and use 50 grams of butter with 25 grams of flour for each 2 cups of liquids whether whole milk, evaporated milk and/or vegetable broth and/or meat stock.

All flavorings are up to you. I always use a bay leaf and simmer it in the milk at the beginning but you can add ground spices, salt, pepper, nutmeg, whatever, just at the end but be careful when adding cheeses that are salty so adjust the salt after the addition of cheeses. And you add eggs or just yolks and cheeses at the end only and how thick you need it to be is up to you and depending on the use, as is shown in the last 2 pics, from a thinner sauce to a thicker one. 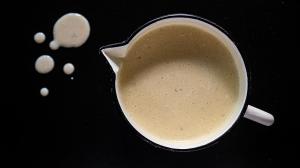 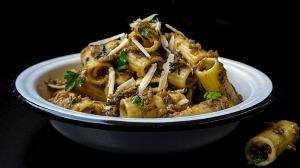 And I mean instead of TOMATOES ! This fine month of September, many of you may be in the midst of or getting ready to prepare your home-made jarred tomatoes and sauces for the coming seasons...