Every season needs its SALAD, according to what’s available and how hot or cold it is out there. It’s autumn so it’ll be some colder and fresher ingredients combined with some warmer, fried or boiled or toasted ingredients on top; and even though my modest version of such a well-known dish, from the southwest of France, is always called a "salad", it’s actually a full meal with its vegetables, meats, starches and its bread slices too …

What’s a GIZZARD ? It’s actually a stomach muscle found in birds, some reptiles, fish and crustaceans (and formerly in dinosaurs) to help them grind the food, with small stones and gravel that they swallowed, because they didn’t really chew their food. Its preparation requires some cleaning and the French way is to cook them slowly in duck fat until they’re preserved. Then they’re either vacuum-packed in bags or canned, with the fat, that you use to cook with and the congealed gelatin that you discard.

Now you understand (if you didn’t initially).

In the southwest of France, in the Gascony region, there are very popular salads that are enjoyed throughout the whole country, called a “Salade Landaise” and a “Salade Perigourdine”, depending on the number of ingredients used, sometimes using more meats such as cooked chicken breasts or cured duck breasts, foie gras, cured ham and other vegetable like green beans and asparagus.

This is a toned down and simpler version which is just as tasty and easy to prepare and assemble and one uses the same oils and fats to cook and to flavor the gizzards, then the potatoes and finally the bread croutons. The rest of the colder ingredients are just prepared ahead and set aside while the cooking of the hotter ingredients is going on.

When ready, it’s all assembled, keeping the warmer ingredients and the colder ingredients separate, until they meet to become this hot & cold or warm & cool salad.

By the way, it’s been so unnaturally rainy and cold, with hail and a few snowflakes this week that I actually feel like decorating for the Christmas holidays right this minute (but I’ll try to wait 2-3 more weeks) . . . :) 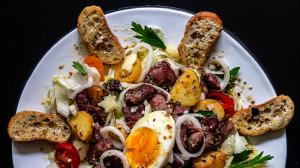 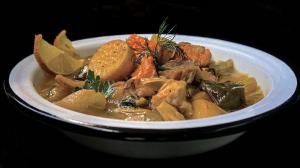 It’s something LIGHTER & CLEARER & ZESTIER and more of an autumnal or northern Mediterranean style fish stew or soup, without the tomato base and heavier spices typical of a summery and...