A delightful northern Spanish celebratory dish that’s involves rolling up 4 different layers and creating a multi-layered spiralling loaf, starting with a layer of freshly chopped tuna blended with onions, garlic, parsley, white wine, breadcrumbs and flour, then a layer of Serrano dry-cured ham slices, then an egg omelet layer, then the layer of red roasted peppers and green olives, all rolled up into one tight log, seared with hot olive oil and baked, later covered in a simple tomato sauce and served with fried potato wedges … Festive in its multi-layered visual complexity and simply satisfying in its combined flavors !

I’m always careful when I’m recreating dishes that are not in my culinary personal history, but when oh-so-northern-Spanish Angel prepared this for us last time and we video-taped it and posted it, I decided that it was time that I re-make it for you, step-by-step.

It’s not difficult. It’s just layering and careful rolling. You can prepare everything ahead. But the rolling is tricky indeed but easy with plastic cling film to guide you in its shaping.

It requires fresh “bonito” filets or steaks which is a large fish variety of the scombridae family, which includes tuna, mackerel and bonito, resembling red albacore tuna (the endangered species) but it’s actually skipjack tuna (which is more plentiful) but I imagine that other types of reddish firm-fleshed, lean (and less expensive) fish could be used as a substitute, perhaps swordfish ? Let me know.

Because the flesh of this fish is drier and less fatty, it's important to add fat on both sides of the fish mixture, the ham slices layer on the inside, so the fish mixture can absorb the fat on the inside while cooking and pouring very hot olive oil on top of the roll, to sear it, develop a nice crust and to add some more fat again. Of course !

And the rest is pretty straightforward, just adding a simple tomato sauce towards the end and served with the fried potato wedges, which could also be regular fries, beans, rice, whatever.

What do I know ? I just cook stuff and it’s predominantly Greek, then mostly Mediterranean and sometimes I venture further abroad ... :) 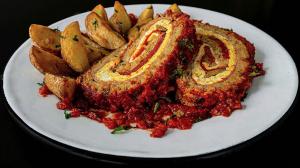 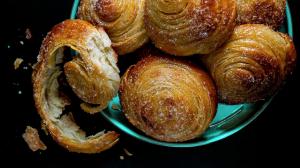 HAPPY NEW YEAR wishes with a sunny brunch recipe to better kick it off and perhaps a few resolutions to at least try everything once in your life, before it’s too late, because until you...