“IT WAS LIKE EATING SEAFOOD DURING THE HOLIDAYS & FESTIVITIES” . . . and I don’t quite know how to explain it ?

Was it due to the various “BRINY” flavors invoked by the anchovies, capers, black olives, and even the crumbled feta cheese ? Maybe, but it doesn’t actually taste like seafood, it’s just an impression.

Is it because it’s served on a LARGE PLATTER like seafood waiting to be split open and devoured ? Very probably,  because it’s quite inviting and festive-looking.

Is it because of the TIME-CONSUMING and devoted act of PEELING off the individual leaves and scraping off the juicy flesh with your teeth until reaching the more tender artichoke hearts ? Quite possibly, because it takes more time to eat them than to make them and with a seemingly HUGE PILE OF REMAINS after you’re all done.

Either way, the satisfaction was a shared one and not only a personal impression nor delusional.

And don’t ask me why I prepared the artichokes this way. It had nothing to do with my personal culinary history nor any family-related traditions (because we’re not an artichoke-eating family). But 2 weeks ago at the market, they had some extremely beautiful green specimens and some pale violet ones that looked like roses. This week they were more regular looking and those are the ones you see in the pictures (but if I find more next week, I’ll definitely get some).

I had initially prepared one artichoke with nothing added to it, tasted it, thought about it and then decided on what I maybe could do and maybe should do and I launched the experiment, with all the additions you see here !

DELIGHTFUL & FESTIVE, simply served with some salt-cured cold cuts (which are completely optional and played the role of the side-dish) and thickly-cut toasted bread to mop up/soak up all the flavorful oily, lemony, briny juices . . . seriously, it was just WOW !

p.s.: What a pity that artichoke season is from July to October in Europe and from March to June in North America. I need to ponder winter holiday version possibilities for preserved artichokes; it’s like a whole new world for me . . . :) 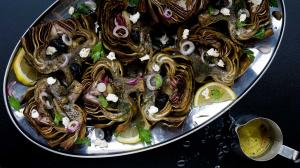 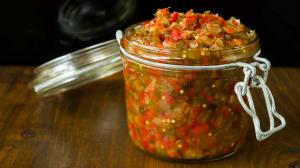 BEFORE IT’S TOO LATE . . . here is the 1st of some of the CONDIMENTS you can make "soon" for this autumn, winter and spring. Simple recipes that simply require patience, but...