I don’t know if Mr. Dean Martin was talking about this kind of pizza-pie or not. But I do know that I don’t often write the funniest or most clever stories. Those usually require a particularly well-developed “mean-streak” to be funny & interesting and when or if I do, it most often has something to do with an event that has upset me, further away from and beyond my own kitchen, but those events seem to be continuous and quite regular now, whether locally, nationally, internationally or globally. We are living in difficult/interesting times.

I’m generally in a good mood and rarely complaining nor brooding (at least not outwardly, we all have our problems, right ?)

An easy smile, lots of winking, humming, whistling & giggling. People like are me are often referred to as “simple” or just “nice”. Not because we’re feeble-minded but because we lack that angry-spiteful-assassin’s edge that people love (or love to hate) ...

PIZZA-PIE as opposed to normal pizza is simpler, thicker, breadier, less fussy to make (especially with the scorching hot weather we’ve been having here in Paris) and with fewer toppings competing with one another.

My version is cheese-less and meat-less, because it just so happens that we used to eat this pizza-pie all the time as little kids and teenagers at parties and we called it “square tomato pizza”.

It is also cheese-free and meat-free because there are some French folks who are vegetarians and/or who can’t stand cheese, and yes, they do exist ! Why would I want to judge them ? Minorities have rights too you know. I just made these versions as you see them and served them with some side dishes of torn balls of mozzarella cheese, slices of parmesan and Italian cured ham (for those who do like meats & cheeses).

DO AS YOU PLEASE and PLEASE OTHERS TOO.

dough (for each version) :

optional : after removing pizza-pies from the oven, sprinkle with grated parmesan or pecorino cheese on top and/or torn mozzarella and/or thinly sliced italian cured ham

note : if making both pizza-pies on the same day, make 2 separate dough mixtures; each one of my baking trays measured 32cm x 24cm x 3cm …

note : you’ll end up with approximately 350 grams (almost 1½ cups of sauce) for each pizza-pie … 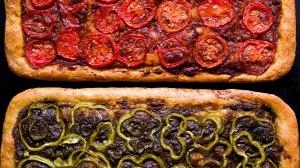 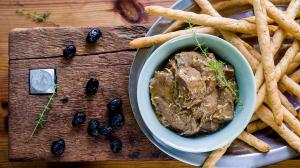 Listen carefully . . .  This is not a “baba ghanoush” nor a “tapenade” nor an in-between mix of the two because there is no ‘tahini’ sesame paste included,...