A preparation that can be added to or included in almost any savory dish : quiches, omelettes, pizzas, pastas, lasagnas, sandwiches or just as a side-dish with roasted meats and fish … And with a special ingredient that we often don’t think off when we roast things : VINEGAR ! It adds just enough depth and acidity, like and alongside lemon juice, but more intense and with more “bite”, to intensify flavors, even though it evaporates and/or disappears and is but a distant memory after baking, but its presence can be felt.

I suggest using plainer vinegars like white wine or red wine vinegar but you can just use distilled vinegar or rice vinegar too or malt vinegar for extra depth but not balsamic vinegar, unless it will be served simply as a side-dish for roast meats and you want that sweeter, caramelized flavor as well as that deeper and darker color.

Is it a recipe or just a part of a recipe ? It’s actually both.

It’s October. I get sad when it gets colder and wetter. I miss leaving all the windows and all the doors open and having all that fresh and breezy air race through the house. I miss hanging around in shorts and t-shirts (who needs underwear when it’s that hot outside) ? I miss letting my washed clothes quickly dry in the sun. I miss the plants growing almost magically and presenting their beautiful leaves, blooms and sometimes fruit and vegetables.

At the same time (and also because I grew up in a much colder Canadian climate), I realize that this colder period is conducive to sleep and rest and recuperation. It gives the environment (at least the ones that I lived in) the time to gather up its strength for the spring and summer to come.

These are pretty much the last weeks to use the last of the summer produce, before the autumn produce rolls in and assumes its well-deserved and nourishing place.

It’s true that we’ve gotten used to having everything available all year round but it’s not natural. It’s very modern and contemporary and practical indeed, in shape and form but the depth of flavors and taste is lacking.

I’ve been making this preparation at least once or twice a month for the past 3 months and using it everywhere I can. It’s wholesome, it’s delicious, it’s nutritious, it’s versatile, it’s adaptable and simply perfect and it’s your last chance to remember and pay a tribute to the summer’s bounty, at least until next year . . . :) 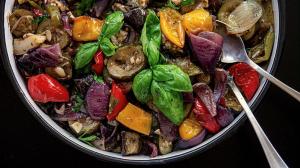 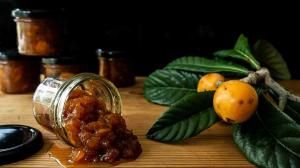 We have a tall LOQUAT TREE in the shared garden of the property-owners. The LOQUAT isn’t a well-known fruit and it is still often called a Japanese MEDLAR or PLUM, even though originally...