A small and simple dish with honest and readily available flavors, using a MIREPOIX base and the simplicity of BEER, but pushing it until it becomes not only its foundation of flavor but the actual structure of the dish, with no interfering extras.

A French MIREPOIX (named after the Duke of MIREPOIX) is usually 2 parts diced onions, 1 part carrots, 1 part celery and some garlic and bay leaves, simmered and caramelized in fats, whether butter or olive oil and even lard or bacon fat (which I avoided here not to overpower the rabbit flavor). The rest of the dish follows that principle with the only addition of grainy mustard, without adding extra thyme nor parsley which is nice too.

The recipe could be easily adapted to chicken too but I chose rabbit which happened to be available but also because instead of having a 2,5 kg leg of LAMB that serves 6-8 people for this year’s Orthodox Easter weekend, it was wiser to down-size it all and make a dish for 2 confined people that could be served 2 different ways for 2 different meals, as a stew or with 1 extra step becoming a roast, but everything is still slowly braised together to guarantee a delicate, tender, fall-off-the-bone meat dish, with as much vegetables as meat and a broth that could become a gravy.

p.s.: you can make a small amount of rabbit stock before beginning the dish and even more stock after finishing up the dish with the remains … just a thought !

Enjoy your weekend and take care of yourselves … :)

gravy (only for the roast) : 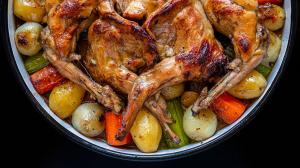 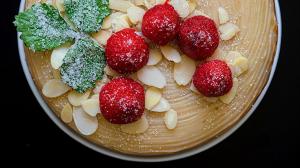 We’re living in interesting times. Everything seems backwards, topsy-turvy, inside-out, but life goes on and it’s my sister Stella’s birthday today ! Despite the worrying situation...