"THIS IS THE BEST ACCIDENTAL RECIPE THAT HAS EVER HAPPENED TO ME ! ". . . and here’s the story :

One evening, I was testing different batters for coating and frying fish (for a fish & chips recipe) using different combinations of flour, fermented milks, beer, etc. and I left the extra leftover batters in bowls on the countertop overnight. The next morning, before throwing the old batters away, I smelled them. I noticed and I really liked that fermented almost yeasty smell (even though there was no added yeast in the batters). This was the work of the beer and the flour and the fermented milk. Instead of throwing it all away, I weighed it and added an equal amount/weight of flour and some yeast and waited to see what would happen. It was around 20°C in the house that day. In the evening I looked at it again. It had risen and looked good and smelled great but it was late and I was tired and sleepy and I placed it on the balcony until the next morning. The temperature was 10°C on the balcony that night. In the morning, I folded over the dough (to better trap and create air pockets, I let it rise again in the house at 20°C and baked it in a burning hot cast-iron dutch oven. It looked pretty good, it had a great texture (both inside and out) and an excellent taste.

I went back to my old notes and scribblings of the recorded ingredients and weights of the initial batters that I had left out on the counter (I always weigh the leftovers too) and I started recalculating what the percentages of the initial ingredients were … and then I started everything again, using only fermented milk (buttermilk, kefir, etc.), beer, flour, salt and some yeast. Same result but even better and more voluminous and tastier.

For the first and second rise, I can only tell you what I did and what happened, but it will be different according to the temperatures where you are, whether inside or outside your homes or during the nighttime or the daytime of course … Either way, if it seems to be rising too slowly, put it somewhere warmer. If it seems to be rising too fast, put it somewhere cooler. The important thing to know is that the longer the dough takes to rise, the tastier it will be. I’ve tried letting it rise 36 hours and also 48 hours. It did not become too sour because of the colder temperatures. Just look at your dough once every now and then and you decide what you want to do.

The dough is relatively soft because of the high liquid content so a baking form or container is necessary and preferable to get the shape you want. The dutch oven helps a lot too for the perfect high temperature environment. But I also used this same dough to make a pizza that just spread out nicely and thinly and was crispy as well as additional little compact hamburger buns that I baked in mini spring-form baking tins. The possibilities and the flexibility of this dough are awesome !

24-hour sourdough bread (without a starter)

note 2 : depending on how much yeast you decide to use and the temperatures (whether warm or cold), the rising time will always vary … either way, the dough is ready when it has doubled in size for all variations, and this could be almost 12 hours or 24 hours or even longer if you prefer a very slow rise; the second rise (almost doubling again) is at room temperature (20-23°C) for  1½-2 hours

note 3 : cooking the bread in a cast-iron dutch oven creates an extremely hot and steamy environment, spraying extra water inside the oven and on the bread, after you remove the cover, creates an even crispier and crustier bread

*NEW NOTE 4 (just added September 25, 2016) : for the bread to expand alot and to be quite high and crustier, you need to keep the crust from forming too quickly so the bread can continue to expand while still baking inside the cast-iron dutch oven; carefully remove the hot pot from the oven after the first 15 minutes of baking and spray the top with water, recover with the lid, bake another 15 minutes, then remove and spray and recover again ... at the end, as mentioned above, remove the lid completely after the initial 30-35 minutes baking time, bake for another 5-10 minutes (without the cover) until golden, then at the end, completely remove the bread from the cast iron pot, remove the parchment paper too, spray all sides with water, spray the oven with water too and bake for another 5 minutes until darker and crustier ... :)

24-hour sourdough bread (without a starter) 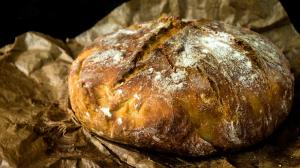 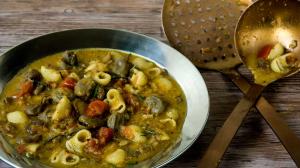 “PASTA E FAGIOLE” or as I prefer to call it, simply and modestly, PASTA & BEANS SOUP . . . because everything is translatable (or almost) and saying it in Italian doesn’t...