Portokalópita (from “portokáli or orange and “pita” or cake) is a typical Greek cake whose main ingredient is sweet orange, dried shredded filo as well as yogurt, eggs, sugar and vegetable oil. It belongs to the family of desserts called “siropiasta”, which are sweets that are bathed in syrup such as baklava, galaktoboureko, revani and others.

Portokalópita is very popular in Greece and is usually consumed as a square sliced dessert with coffee, but it can become a fancier dessert if shaped differently and served with yogurt ice cream, as you can see in the photographs.

Instead of using only sweet oranges, I’ve combined 3 citrus fruits for more complexity but either option is great. I only use the zests in the cake batter and the juice and pressed empty rinds are used to prepare and flavor the sweet syrup for soaking, with hints of cinnamon and clove.

I make enough syrup so that it is equal to at least ¾ of the total weight of the baked cakes, hoping that they will be able to absorb almost all of that syrup over a 24-hour period, but it’s okay if some is left over.

Ideally, it is consumed the next day, when the syrup is fully absorbed and all the flavors of the cake have intermingled. The syrup is absorbed quickly at first but then slowly, so save the extra syrup and pour it over again until the cake has practically absorbed at least 66% of its baked weight in syrup.

The texture and feel in your mouth should be fluffy and juicy. The shredded filo creates a lattice throughout the dessert keeping it aerated and spongy but not compact and the final resulting texture is surprising and unexpected !

I’ve figured out a smaller recipe that requires equal parts (½ cup each) of eggs, yogurt, vegetable oil and sugar, amounting to a total of 2 cups, later to be combined with the 4 cups of pre-dried and shredded filo dough. Since my version is a small dose for 3 cups of batter for 6 large individual servings, feel free to double it for a 6 cups version in a square baking dish.

It’s an easy desert to prepare as well as to remember and when served as individual half-spheres or dome-shapes, it resembles half oranges, which I find is a nice special touch. Topping it with some yogurt ice cream, makes it even better and if you happen to have a citrus tree, then add a fragrant citrus leaf on top for the finishing touch. 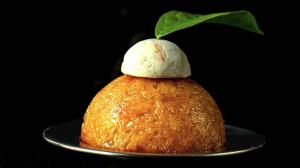 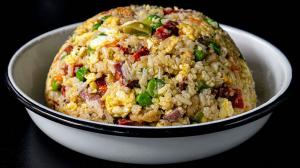 The end-of-the-year holidays countdown is upon us : home, work, family, family, friends, neighbors and all those lists of extra things that need to get done today, tomorrow, next week, in 3 weeks,...