SIX LAYERS IN ALL. Two alternating layers each of sliced brie cheese, fried mushrooms with leeks and aromatic bechamel sauce (made with the vegetable leftovers), all wrapped up in an over-the-top and high whole-wheat crust ...

Mushrooms and leeks are pretty inexpensive this time of year and I think I’ve included mushrooms in my preparations once per week for the past two months, whether as appetizers, soups, in omelets and now as a luscious quiche. I like to use what’s readily available each season so I can try to feel guilt-free when I eat, as well as save some pennies.

There aren’t many fruits and vegetables that could be considered fresh or appropriate in the winter season unless they’re coming from very far away, so try making dishes that are more environmentally friendly and as local as possible and use potatoes, carrots, celery, onions, garlic, cabbage, leeks and interestingly enough, MUSHROOMS too, whenever you can.

Let’s not forget, that less than a century before our time, people consumed what was in season and/or what was transformed to be preserved. Cheeses were how folks had access to preserved dairy products in the colder months, just like sausages and other cured meats were prepared to replace fresh meat (before refrigerators and freezers) and everybody prepared fruit preserves and pickled vegetables and dried foods like beans, cereals, nuts and seeds.

Back to the recipe and how I’ve done what you’ve already seen me do before. I’ve made a béchamel sauce for my quiche with milk, when usually, people just use heavy cream, sour cream or crème fraiche, in which they mix in the eggs and grated cheeses. Why do I bother with the béchamel ? To cut down on the heaviness of the dish, since I’m already using so much cheese and eggs already. The béchamel lightens the quiche, and makes it almost airier when it bakes, as opposed to a much denser omelet-like custardy quiche.

I’ve used brie cheese, because I prefer the milder taste with the mushrooms but if you prefer a stronger flavor, then use camembert.

I love earthy mushrooms and often used them in all my stocks and broths and even as a meat substitute. It’s funny how we didn’t really eat mushrooms at home when I was a kid, because they grossed out my dad. It makes me laugh. 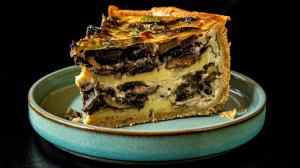 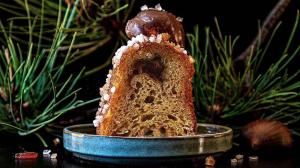 This is one of those modified pastry or brioche dough and yeasted cakes you only make once per year, after the New Year festivities and for Epiphany on January 6, especially in francophone countries...