Here’s a versatile cake recipe that I seem to be able to remember how to make without even looking at the written recipe, because the measurements are easy and I modify some ingredients each time, depending on what I have available. The cake shape never changes though and it’s always a “ciambellone”, which is the name of its shape, and you can just as easily replace that word with crown or ring or donut or if you know a lot about cakes, then you’d say it’s a bundt or savarin cake and for many of us simpler folk, saying it’s a cake “with a hole in the middle” will also do !

Back to its versatility. Sometimes I’ll use only lemon but if I have lime and orange, I’ll use that too. The recipe calls for ricotta but thick Greek yogurt works just as well too, for a slightly lighter more tangy cake and mascarpone can be used too for something denser and richer and sometimes, if I only have a little of each, I’ll combine all three until I have enough for that ¾ cup measurement. A neutral oil is most often used, but I’m Mediterranean, so replacing half of the sunflower oil with olive oil, makes me happy.

The flavorings are obviously dependent on the citrus zests and juices but some vanilla and if possible, a hint of limoncello adds a nice touch.

The difference here is the oil & baked sugar coating which replaces the usual buttering and flouring of the cake tin and makes it easier to remove and flip out from its mold (when it’s still hot) and creates a lovely thin crunchy crust that seals in the cake’s moisture, to which you’ll add even more icing sugar and lemon juice in a final glaze and a final sprinkling of sugared zests and rock sugar.

Cakes, whether round or square or as loaves or with a hole in the middle, without the multiple layers and the frostings and the hidden surprises in the middle or candied cherries and other fancy garnishes on top, need to make a comeback.

Wouldn’t you just love to be in a café or restaurant and just ask the waiter or waitress for a piece of cake, nothing more, without any further descriptive adjectives added on ? I know I would. Today, we’re given so many choices that we’ve forgotten how to appreciate (or even ask for) anything simpler.

Simple is good too, and so much easier when it’s you making it … :) 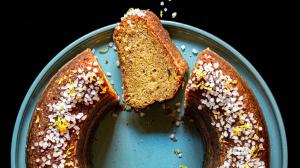 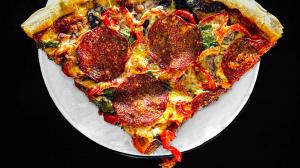 Another new pizza recipe, celebrating the flavors of SPAIN and PORTUGAL, using the same techniques that I’ve used in the past but with different toppings and some modifications to get the...