I don’t pay enough attention to leeks, even though they always flavor most of my broths, my spanakopita spinach pie as well as additions in many soups and stews and chicken & fish dishes, but it’s never the STAR of the dish ? So here’s a quiche with extra leek flavor because when I say LEEKS, I mean that 50% of the quiche filling is made up of partly-cooked leeks and the other 50% is the soft goat cheese, crème fraiche and eggs mixture.

Most quiches are only 25% vegetable filling but the proportion of the vegetables in this quiche filling is 50% leeks or 3 cups of the partially cooked and tenderized leeks (from an initial 6 cups of chopped fresh leeks) and 1 cup of the soft goat cheese, 1 cup of the crème fraîche (or sour cream or heavy cream) and 1 cup of the eggs.

The way I see it, if I’m going to eat more vegetables (even though I already eat a lot due to my Mediterranean diet) and if I’m going to make a vegetable quiche, I want the flavor of that vegetable or combined vegetables to shine through and not to be smothered in overly large quantities of dairy products and eggs. I often reduce the cheeses, cream and eggs in quiches by making a bechamel with the remaining vegetable cuttings but since I’m only using leeks here, I stayed simple and didn’t make a bechamel to lighten it up. And don’t forget to add many fresh herbs in the filling, such as more dill, chives and parsley too.

The crust is a wholewheat and olive oil crust that feels like a soft bread dough, is easy to spread out by hand (or roll out if you prefer something neater) and requires no pre-baking before adding the filling. I also add some seeds and dried dill to flavor it.

The drier and stronger tasting goat cheese log is added as round slices only on the top as well as some decorative dill fronds.

It’s an easy dish to assemble from start to finish, served with a green salad or even young peppery sprouts that I was lucky to be offered during a visit to a city urban farm, which is actually a parcel of land, like a park, surrounded by buildings, with several greenhouses and small plantations of small vegetables, salads and sprouts and fresh herbs.

Do you have any urban farms in your neighborhood ? … :) 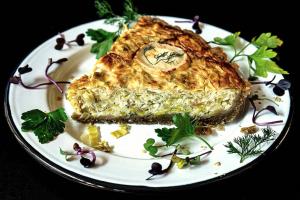 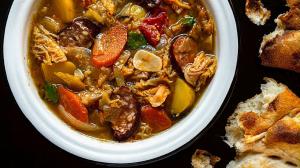 What else would you eat in this freezing weather ? Something hot, something you can chew on but also slurp, something meaty (unless you’re vegetarian and you add beans instead) and served in a...