It’s an easier and simpler method to make this Greek LAGANA flatbread (quite similar to an Italian focaccia) that is both moist and airy on the inside and crunchy on the outside and much tastier than a traditional version too ! Why ? Let me explain …

It’s a question of the dough hydration (or the ratio of the liquid ingredients to the dry ingredients) and the liquids you choose to use (like using half beer instead of just water) and the oils (like sesame oil on the inside and lots of olive oil on the outside to make it crispy) and how you will knead it whether by hand or with a mixer with a dough-hook (or by using a food-processor) and does the dough really need to rise twice (once is so much easier) and of course (and this is something people often forget), the baking pan or baking dish you choose to use (like what size can it be and what material is it made of) to make it as non-stick as possible and provide the best results.

I’ve been making these flatbreads for the past 2 weeks, slightly modifying the versions each time and testing out the differences.

Let’s remember that a “lagana” flatbread starts out as a soft blob of dough (just like a focaccia) that spreads out and flattens out (with a little help) and is then poked, sprinkled and baked.

Here are my findings :

Firstly, why not mix different flours like I did with 20% whole-wheat bread flour and 80% white bread flour instead of all-purpose flour ? It creates a bread that is stretchy and chewier. And why not also play with the liquids by using a mixture of half beer and half water and using the leftover oil from your tahini sesame paste instead of just olive oil ? It’s tastier. Trust me.

Secondly, instead of kneading this sticky blob of dough by hand for 15 minutes or using your mixer with a dough hook for 10 minutes, you could use a food-processor for 2 minutes (like I did several weeks ago for my thick-crust pizza dough). It’s almost the same principle. Not kneading it by hand, implies that you can also increase the ratio of water and beer to the flour. I began with 360 grams or 1 ½ cups of beer and water and slowly, over the trials, increased it up to 390 grams or 1 ½ cups + 2 tbsp. The softer more hydrated dough will be moister and fluffier and taller.

Thirdly, do you need to knead it twice with a first rise for 2-3 hours and a second rise for 45-60 minutes ? I tested it several times, side by side. The dough that was well-kneaded once and rose for 2 ½ hours was actually fluffier and as chewy as the dough that was kneaded twice.

Fifthly (is that even a word ?), the type of baking dish you use also makes a difference. Non-stick dishes are very good, enameled bakeware is excellent and the enameled drip-pan that is usually sold with your oven is the absolute best. Try oiling your baking dish well and use one that is glossy and scratch-free and as non-stick as possible with rounded or curved inside edges and not too low either so the bread dough doesn’t stick to the plastic film that you will use to cover it, when it rises. As you can see, I haven’t used any baking paper in any of my baking trials and the flatbread just slipped out of its baking dish.

Sixth observation, sprinkling sesame seeds on top is traditional, but feel free to add flax seeds or even a mixture with sunflower and pumpkin seeds and a light sprinkling of flaked salt on top for a heavenly result that will be so good that you won’t be tempted to add anything on top of the bread to make it a tasty and satisfying snack or an accompaniment.

On a more serious (and less culinary) note, as you all know, around the world and in your neighborhood too, it’s been highly recommended to stay at home as much as possible these past few weeks. It’s being called “social distancing”. Maybe if you buy a 5 kg or 10 kg bag of flour, you could just stay home and make your own fresh flatbread every 2 days for the next 3 weeks and keep yourself and your loved ones safe and sound for as long as possible, until everything quiets down ? It’s just an idea, so just think about it.

Stay safe and healthy my friends and stay at home and make some bread … ;) 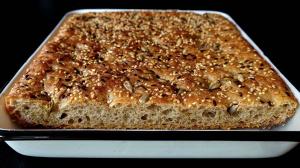 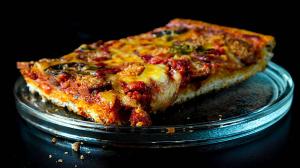 I know you’re feeling the cold temperatures out there (just like I am), so perhaps something hot & spicy (instead of a soup) can warm you up this weekend and get your blood boiling (or at...