MAYBE you’ll understand and MAYBE YOU WON'T ?! I’m obsessed with the pizza of my childhood, my teenage years and my younger to older adult life . . . It’s all memory-related.

Ordering an XL PIZZA from our favorite neighborhood pizzeria was always a moment of joy and homey comfort. To this day, the first thing that my family serves me when I fly to Montreal from Paris, after the 7–hour flight, customs, baggage retrieval, the ride home, is a MONTREAL-STYLE ALL-DRESSED PIZZA (XL for 4 or JUMBO for 4 with leftovers the next morning) … and for those of you who are familiar with this, there’s always a small golf ball-sized ball of baked dough placed right in the middle and on top of the pizza so that the delivery box cover doesn’t stick to the melted cheese, I love that.

I’m not saying that it’s a 'sophisticated pizza'. It’s not an elegant almost carefree slathering of fresh tomato sauce, topped with ripped balls of mozzarella di bufala campana and a few fresh basil leaves carelessly strewn atop a thin crispy dough with puffy and blistered bare spots here and there … it’s actually nothing like that … but this one’s my favorite and sometimes it’s messy-looking too.

How to proceed : first the dough, then the tomato pizza sauce, then the layer of thinly-sliced pepperoni sausage, then the partly dehydrated sliced mushrooms and sliced green bell peppers and finally the mozzarella.

Well, how can I make it home so it’s just as good ? A home oven isn’t hot enough (a real pizza-oven reaches 300°C) nor will it give my dough a smoky and partly grilled pizza-oven taste; the mushrooms and green bell peppers will release their water (perhaps the water-packed ball of mozzarella too) and turn the whole thing into a soupy mess ???

Some pre-pre-preparations will be necessary.

So whatta I gotta do ?

1. Use some toasted flour when you flour and stretch out your pizza dough to achieve that smoky nutty pizza-oven baked taste and bake at the highest temperature possible.

2. Bake the pizza directly on the bottom surface of the oven to crisp up the bottom of the crust and then switch to the middle rack (because I don’t have a pizza stone nor a baking steel).

3. Partly dehydrate your sliced mushrooms and green bell peppers in the oven beforehand so they lose almost 50% of their water (you’ll start off with about 400 grams of each after cleaning and slicing them up and you’ll end up with around 200 grams of each (once partly baked and dehydrated).

4. The sauce must be smooth and not too much of it either because of the water-release issue again.

5. The cured sausage (pepperoni is the custom) must be slightly spicy and tender and very thinly sliced.

6. Even though the water-packed mozzarella balls are great, for this homemade pizza, you’ll need a drier more compact block of mozzarella (it’s the water issue again).

7. The recipe here is ideal for two 30 cm pizzas (it’s easier to get a thinner crust when making smaller versions but you’ll have to repeat everything twice) or one very large 45/50 cm pizza.

**the photographs I’m showing you here represent all the ingredients broken-down separately so you get a better visual idea of what each layer looks like when spread out individually (the sliced green bell peppers and mushrooms are shown fresh before baking and partly dehydrated later).

And that was PART 3 of the PIZZA SERIES … PART 1 was the DOUGH (see recipe here), PART 2 was the SAUCE (see recipe here) and I might publish PART 4 with another pizza recipe but an ALL WHITE PIZZA this time (but I could go on and on until PART 5 with square deep-pan pizza ? PART 6 with sourdough pizza ? lucky 7 ?) or maybe I’ll change my tune, do a little dessert number next week and wait for the following week to post PART 4. 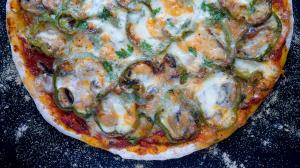 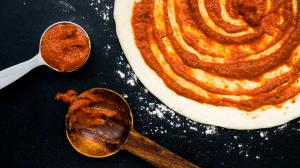 Yup, me again … just about anything can be an ‘okay & acceptable tomato pizza sauce’ … even some crushed tomatoes with some salt and olive oil and maybe some pepper...