TOMATO, FETA, CUCUMBER, GREEN PEPPER, RED ONION, OLIVES, OREGANO, OLIVE OIL, WINE VINEGAR and RUSKS. I’ve convinced myself that this simple and purist GREEK SALAD recipe could like a magical spell that you can cast on the Earth, the Skies and the Sea and if you prepare it and make it today on Augusts 31st, then the goddess of summer will be convinced to stay with us just a little bit longer and perhaps not officially abandon us in 3 weeks !

What ? You all think you know how to make this simple peasant salad that everybody knows about, has eaten and maybe even made before ?

This is what you need to do and this is why.

It’s not easy staying simple. We always want to do more, but sometimes more is too much. This greek "choriatiki"  (which means peasant or villager) salad must remain fresh and simple. The vegetables must be tasty and to make them tastier, I spray them directly with the vinegar and sprinkle them with the salt, which will accentuate the flavors of the vegetables and make them taste better than what they were initially.

This salad is sometimes made with almost no vinegar but I find that the 4:1 ratio of olive oil to vinegar is best, but the olive oil is added later and not emulsified nor mixed with the vinegar. The vinegar is already in the vegetables, just like the salt. Careful, olives and feta are already salty, so add extra salt later if needed.

Rusks (and not fresh bread) are the traditional accompaniment to soak up the juices and olive oil, and they’re usually made of whole-wheat or barley, with a touch of sweetness, to balance the acidity and the saltiness of the salad.

Using RUSKS (see the recipe here) makes this preparation also similar to a DAKOS which is a Cretan version of a Greek salad on a rusk, sometimes only with tomatoes and feta and olive oil or even comparable to a more complex yet drier version of Spanish PAN CON TOMATE. It is what it is.

It’s an “almost the end of the summer” weekend double-post, so let’s enjoy it together, unite our forces and try to magically make the summer linger on, just a little bit longer, pretty please . . . :) 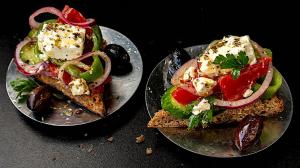 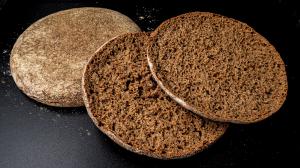 A traditional greek RUSK made with BARLEY, SPELT and WHOLE-WHEAT flours, water, olive oil, honey, salt, yeast and some malt powder is not a dry, leftover thing nor a...