These spicy and aromatic Greek Christmas cookies, (sometimes loosely translated as honey macaroons but rather resembling a syrup-drenched Mediterranean version of gingerbread or a softer speculoos cookie, but without the ginger and with lots of orange), exist in as many variations as there are villages in Greece and cities around the world where Greek expats live today ! Let’s explore all of this together and see how we could modernize and perhaps even dare to update and customize all of these already perfect and traditional recipe variations.

MELOMAKARONA are usually rounded and oval like slightly flattened eggs. All are flavored with spices like cinnamon and cloves and orange zest. All are made with flour but some are made with some wheat semolina and some include walnut powder too. Some are made with only olive oil but some use vegetable oil too. Most include some cognac, of course … It is the holiday season, right ?!

Some are baked and then straight from the oven, while still hot, are soaked in a cold syrup, while some cookies are completely cooled down and then soaked in a hot syrup.

Some are so soft and moist that they fall apart and melt in your mouth because they’re like syrup-soaked sponges, but are hard to hold, while others are firmer with a more sandy and granular texture and sticky with sweetness, because the syrup is mostly absorbed by the outer layer and they remain shiny.

As I said, there are so many variations and there is no ultimately perfect recipe but here’s my version.

Firstly, they are not egg-shaped but resemble thin pine cones and I use a whole half walnut inside of each, as a filling but also to act as a structural reinforcement or a hidden backbone to help the tapered cone cookies to hold their shapes while baking and to avoid them from spreading.

Secondly, I add some nutmeg and allspice but also a hint of mastic resin, for a fresher more resinous taste.

Fourth detail, I use walnuts in several ways, in powdered form for the dough, a whole half-walnut inside as a filling, and some chopped walnuts as a garnish, alongside with some pine nuts and a few flashes of bright green slivers of candied angelica (that I sometimes like to call Europe’s more modest version of vanilla).

Fifth detail, mine are baked a few extra minutes until firmer and thus need to be soaked in the syrup longer because of their crunchiness. They hold their shape beautifully and are granular enough to be a cookie, but sticky and sweet enough to be a holiday version of a cookie.

The preparation is often rapid and not fussy because over-mixing the dough will make the oil separate from the dough. And please remember that baking soda and baking powder react with the orange juice so if you are going to chill them, add the rising agents only at the end before shaping them into balls.

And the last detail is the shaping which is actually quite easy, starting from a small round ball of spongy dough, in which you insert a half walnut, then roll between your palms to taper the shape, then lay down, create a few crisscross indents as a pattern and re-shape again and bake.

Of course, most of the people who regularly make these will make at least double if not 4 times as much, starting with 1 kg of flour, because many are offered to friends and family but begin with a small batch of 24 cookies (or even half a batch of 12 cookies) and you’ll see if they suit you. Or even better, make one large batch of dough, and separate into smaller baking batches and modify the baking time for each to figure out what you prefer, softer or crispier ! 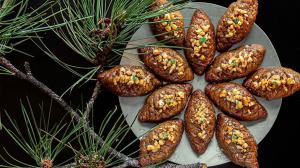 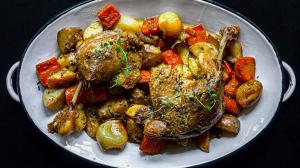 The simplified method for this traditional preserving method for seasonal duck meat could easily become an alternative for an easier do-ahead prepared holiday meal. The method, that involves...