. . . the 11th hour of the 11th day of the 11th month : Remembrance Day - Armistice Day (symbolized by a red poppy in the United Kingdom, the U.S.A., Canada, Australia and New Zealand, while in France, it’s the blue cornflower). The First World War means so much for so many countries that participated, whether directly in their own countries or as allies and neighboring countries to where the fighting occured or as soldiers and volunteers that travelled across the ocean or even from the other end of the world, to courageously participate and contribute to the war effort with their equally immense share of pain, suffering and loss, as compared to those they came to help, in the first place . . .

I have nothing personal to add concerning World War I (1914-1918). I’ve personally lost no ancestors to this war but I’ve spent most of my life in countries whose citizens did. Twenty years in France (where I live now) and twenty years in Canada (where I was born and raised).

Over the past decade, I’ve visited the different national and international cemetaries throughout northern France, starting from the west coast, then to the northern parts and all the way to the eastern borders.

Almost one year ago, I was on a professional work assignment organized by France’s Centenary Mission and the State Ministry for Veterans and Remembrance (part of the Ministry of Defence) in which the ongoing theme (over a 4-year time span from 2014-2018) was (and still is) the 100th anniversary of the First World War. I spent one week in the upper French regions where are located the Somme and Verdun and Arras where many of the major battles took place. Memorials, museums, cemetaries, tombstones (many with names, many anonymous), trenches, tunnels, landscapes (some still scarred and untouched, others transformed), abandoned villages, painful stories and gruesome historical accounts. I was accompanied by personalities who had historical ties to these events. It was chilly and it rained continuously that week, lending the experience a more painful, sad, memorable and solemn aspect … I will never forget that heart-wrenching and tearful week nor can I do this world event any justice nor sufficiently pay it tribute, by anything I could possibly write here.

This winter recipe is typically northern with French and Belgian/Walloon influences. I’ve slightly adapted the traditional recipe for several reasons : personal taste, meatiness, consistency or density versus wateriness and finally more ingredients from different countries to give it a more international flavor.

Endives or Chicory or Chicons (as they're called in northern France and Belgium) are bitter and tough by nature. They need to be tenderized and slightly sweetened but instead of water, lemon juice and regular sugar, I prefer belgian beer and brown muscovado sugar. Endives also release liquid which is why I’ve added a base of cooked potatoes and bread to absorb the extra liquid (just in case, because the mere thought of the endives bathing in a watery, soupy mixture with the cheese floating on top just freaks me out). I double up on the varieties of ham and use regular and dry-cured hams to give it more body and I also use a mix of cheeses (a lot of gruyère in the béchamel sauce and more grated gruyère and cheddar as a topping) and I spice it up more by combining allspice, nutmeg and different ground peppercorns.

p.s. : it wasn’t my intention to post this particular recipe this week nor on this very particular day for remembrance, but yesterday as I started making this frenchy dish (for Steph, a frenchy friend living in Florida and coming to Paris for work this week and for dinner tonight), for some mysterious and unknown reason, I started photographing everything against a plain black background, it seems that it was just meant to be … 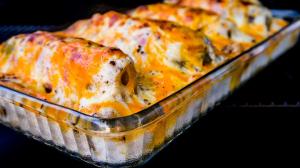 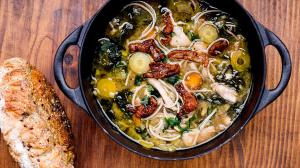 SNOW  in Paris on Monday, November 7th between 8:15 and 8:45 am . . . okay it melted right away but anyways it’s really rare here and it made me nostalgic. As my friend Nicole...