A chunkier & heartier version of a perfect winter meal with a bottom layer of beer-braised beef, later shredded, cooked with vegetables, later chopped, followed by a layer of whole corn kernels and creamed corn layer too and topped with a layer of partly-crushed boiled root vegetables such as potatoes, parsnips and white carrots and then a creamier mashed mixture of those same root vegetables and a finishing touch with melted butter, paprika powders and crushed pink peppercorns, for a golden crust …

This is obviously a modified and reinterpreted Quebec-style version of this dish that is usually made with a layer of cooked ground beef with peas and carrots and onions, then a layer of creamed corn and finally a layer of mashed potatoes and also quite similar to the northern European or British version.

Many of us kids in Canada who were of different Mediterranean origins first discovered this dish in school cafeterias, then convinced our Mediterranean parents to make it for us and finally made our own versions when we were old enough to cook. I was pleasantly surprised to rediscover this dish when I moved to France, since it’s a very northern European dish.

This version is much chunkier ! Instead of grinding the meats, they are slowly braised with various vegetables, then the meat is shredded and recombined with the chopped vegetables and some of the braising liquid. The bright yellow corn layer is creamed but also whole and the mashed white vegetables layer is a combination of white potatoes, parsnips and white carrots.

It’s easy to prepare in advance and refrigerate before baking (which is why I use a dish with a lid) and later baked the next day.

It’s a hearty dish that hits the spot and warms the soul (especially during this particularly cold 2019 winter) . . . :) 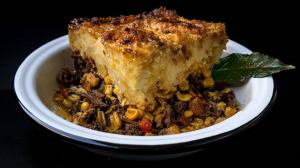 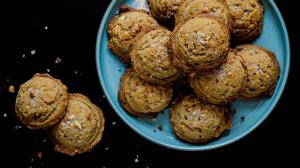 The secret to their "domed" shape is not just due to using a mini ice-cream scoop. The cookie dough must be chilled and then baked in a very hot oven (just at the beginning) so that...