For kids, it's all about the chocolate eggs, chocolate bunnies, chocolate everything, the more the better ! We're all familiar with cheesecake, whether baked or non-baked, with or without a cookie crust, with or without a topping. But "kadaifi filo" pastry dough (unfamiliar to some) is like the regular flat sheets of filo dough (that I've used in recipes before, see spanakopita, baklava) but shredded into vermicelli-like long stringy strips. It's quite new to me so I started small. Little nests for little chocolate easter eggs, to top off my mini-cheesecakes. Next week (because I still have a lot left) and it's Easter again (Orthodox version) so I'll do something fancier with it and shape it into I-don't-know-what yet ! Have a great weekend… :) 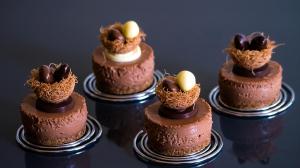 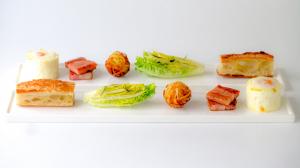 "The robot-kids are coming over and bringing along their non-robotic parental units. They're good kids, they don't say much or even look up much. They're watching their mobile phone...